Today I am featuring cards using the retro Hanna set and the retro Riley, these will be re-released by Hanna Stamps after the release party on Monday 1st June.

So what do we mean by retro Hanna & Riley??? During the summer months Hanna Stamps are having a retro summer. Retro summer will consist of Hanna Stamps regular released sets, and bringing back one of the old released sets into the mix. This will give the newer customer's a chance to see the old sets in a new light, and then give the customer's that already bought the sets a new way of using them. There will be a retro Riley and a retro Hanna set each month to go along with the new released ones. Hanna Stamps are going to include the retro sets/stamps in with the BUY IT NOW price bundle....another great way to save on those older stamps/sets. What if you already have those retro stamps and do not want to buy the BUY IT NOW bundle, but still want the special price for the new ones, we are going to have 2 BUY IT NOW bundles. 1. A BUY IT NOW bundle, and 2. A BUY IT NOW RETRO bundle. These BUY IT NOW bundles always saves you 15%.

This month’s retro Hanna set is Route 66, it is fun getting out some of the older stamps to play … Hanna is having lots of fun riding on her red motor bike! 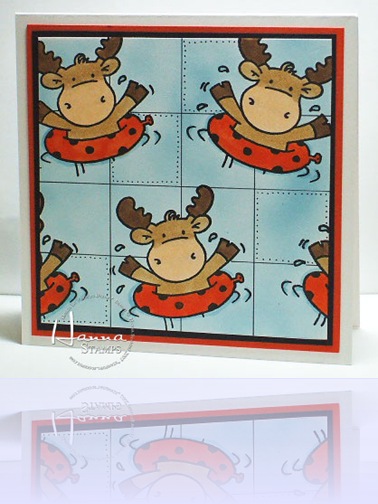 My second card uses “Swimmer Riley” ….. this is the retro summer Riley stamp which we are featuring during this months release.

I used the Modern Grid technique to create this card. First up I stamped Riley randomly over my white card. I then used a fine black marker and good ruler to create the grid lines and the dots in the grid lines. Once I got this far i decided that riley would look better surrounded by blue then he would look like he was swimming so I masked each of the Riley's and then used my copic airbrush system to apply the blue background.

Don't forget to check out the blogs of the other design team members to see what they have been creating with these new sets ... you will see the links to there blogs on my sidebar.

We also have two guest designers this month, click on the links below to check out there blogs and creations using the new release sets:

Both cards are rockin Frances.

Oh fabulous cards Frances!!! Love the colors you used on the Riley one - fun!

These are both fantastic cards Frances!! Love Hanna & Riley!

These are BOTH adorable....but I especially love Floatie!

Hee! Swimmer Riley just cracks me up! He looks fabulous in the grids---so clever. And, of course, motorcycle mama is hot as ever!