It’s A Date! for a Riley Blog Hop! 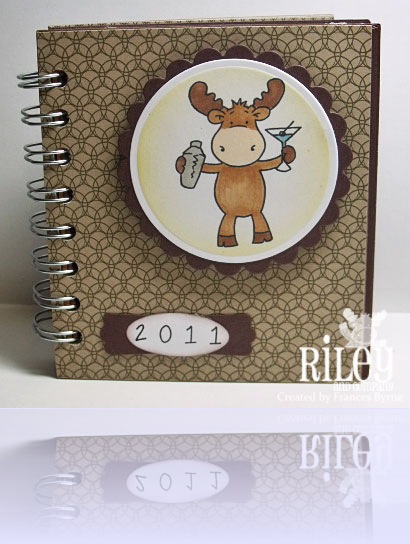 Be sure to leave a comment on everyone’s blog as you travel from blog to blog as each of the Riley and Company Design Team members will be given away one new Riley stamp to a random person who leaves a comment on their blog!

10 new Riley stamps plus 2 Sentiment sets are NOW available from the Riley and Company Store.

Now I must warn you that my post is very long today as I have a lot of photos of the projects I created for this hop … I hope you enjoy! 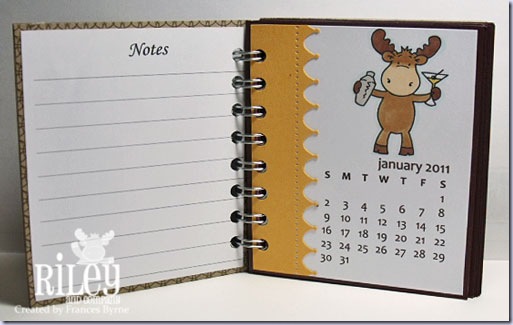 I have used 7 of the 10 new Riley’s/Sophie's that are being released today in this project, plus 5 other previously released Riley's. Of course what else would Riley be doing in January but celebrating the New Year! This Riley is called Martini Riley. 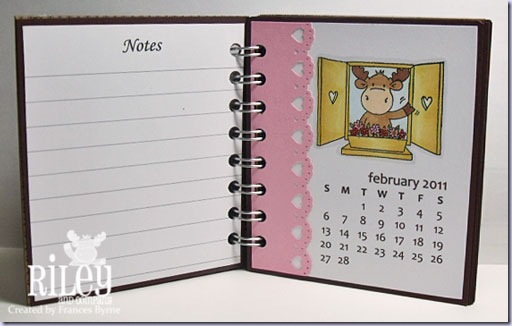 For my February page I used Window Riley, this one is from the July release. If you follow my blog you would probably remember that I recently purchased The Cinch Binding Tool which I just love, this is what I used to create my calendar. 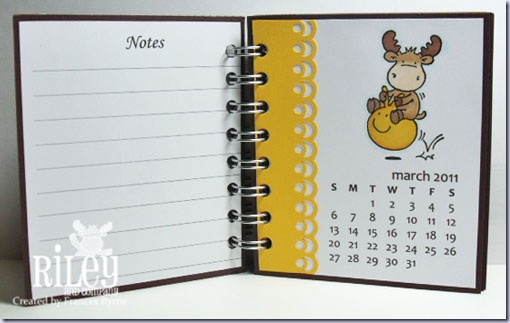 Bouncy Ball Riley bounces onto my page for March … maybe I should have used this one for April … it might have suited April Fool but it is here to stay now hehe! This is another from the July release. 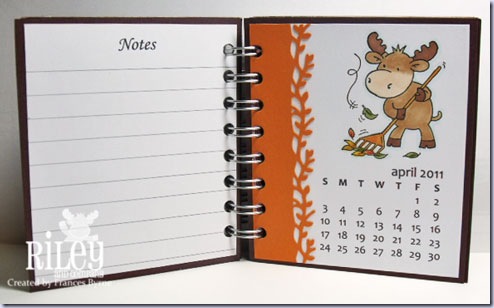 You might notice that I have used images for months that many of you wouldn’t use … remember I live in Australia so the seasons are all different to those in the Northern Hemisphere … April is the second month of autumn which is why I used Raking Leaves Riley on this page. This stamp was release in September as part of the Halloween/Fall release. 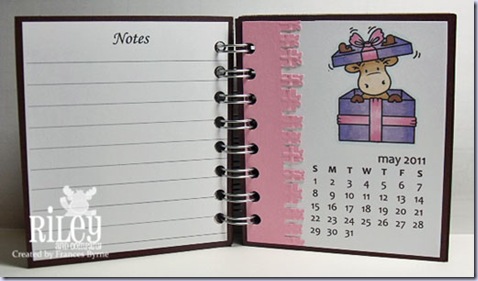 This cutie is Gift Box Riley … it reminds me of birthdays and Mother’s Day which is why I added it to my May page. This is one of the new stamps being released today! 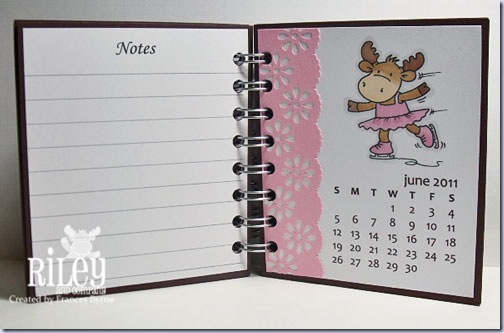 June is the beginning of winter where I live so I used Ice Skating Sophie for this page …. this is another of the new stamps being released today. 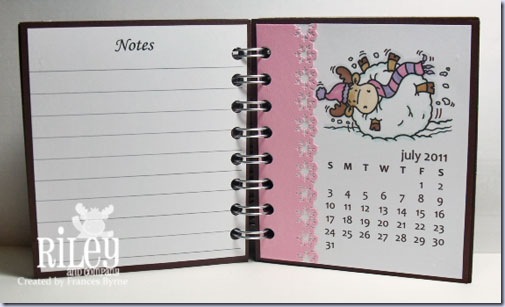 This Snowball Riley makes me laugh … he is so adorable … I think maybe I might end up like that if I was anywhere near snow hehe! 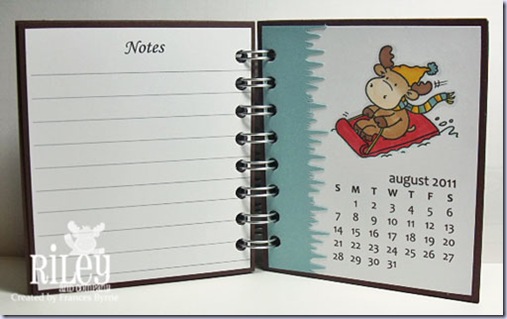 For my August page I used another brand new stamp … this one is Sledding Riley. 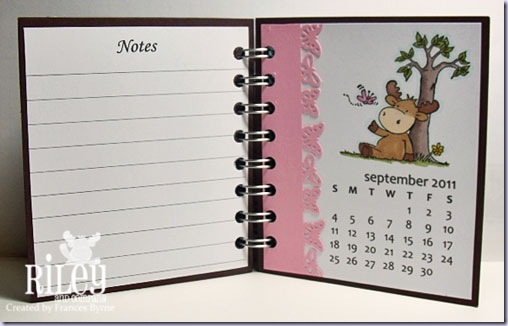 Spring arrives in September in Australia so I used this cute Under The Tree Riley. 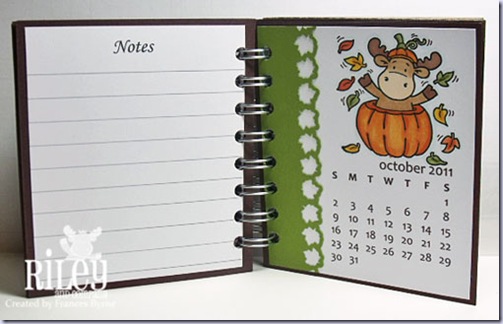 Even though Halloween isn’t big in Australia … I couldn’t resist using a Halloween image … the other Halloween images released in September didn’t fit on this page so I used this cute Popping Pumpkin Riley. 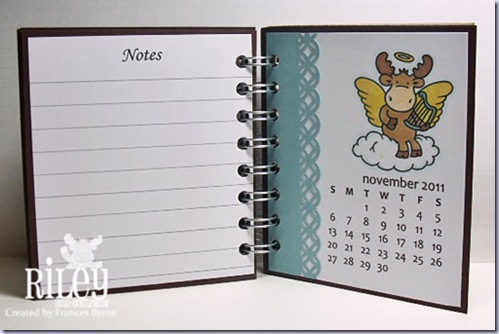 For November’s page I used Angel Riley … for no other reason that I wanted to hehe … what better reason is there … this is one of the new Riley’s being released today. 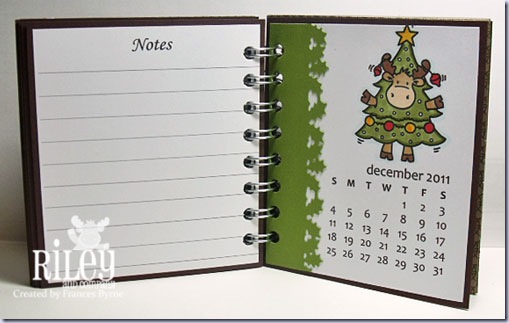 And finally for the last month of my calendar, December … I used Ornaments Riley. The calendar pages used in this calendar was a download I found in the Template Forum of SCS.

My last project I have for you today is a Christmas card in the shape of a Christmas Cracker. I used Ornaments Riley for this.

Here is the inside of my card, the sentiment used here is from Moose Sayings 1 sentiment set.

Well that is about it from me for today, now it is time to hop on over to the sensational Cathy Edgar and see what stunning creations she has install for you today.

Enjoy the rest of the hop and thanks for dropping by! Don't forget to leave comments on all the blogs, so that you have a chance to win some blog candy.

O-M-G! That is FABULOUS! Now I have to make one - what a great class that would be!! THANK YOU!!!

Martini Riley! So much fun!

OMG!!! I think this is tbe best Riley project I have ever seen!!! So stinking cute I can't stand it. You do beautiful work :o)

What a gorgeous calendar book... I love Martini Riley!!!!

Oh My Gosh!! So AWESOME!! I love your calendar. Martini Riley is just the trick for New Year's. Bouncing Riley made me laugh out loud!! Ornament Riley is to-die-for. Great project and coloring!!!

Gorgeous calendar book Frances. Fascinating to see how all the seasons are different for you.

OMGosh Frances these are Fab-U-lous! Love the calendar and the different edge punches you used, and your Christmas cracker card had me fooled, I really thought it was real!

the calendar is awesome....and seeing Riley every month makes it even better....LOVE HIM

The Crazy Life of a Navy Wife said...

Wonderful project! I've never made a calendar!! My favorite is the snowball :)

What a great project... I love Snowball Riley!!

Wow Frances, this is incredible, love everything about it.

I love the Martini Riley!!!! I have to have that stamp! Fun!!! I love the calendar, and it was interesting to see the differences in seasons! Thanks for sharing!!!

your calendar is super cute you made using all these Riley's in it. your card is cute too!
`heidi brawley

Great way to use all our Riley stamps! I enjoyed your calendar and it's fun to remember that on the other side of the world, seasons are totally reversed!

Too cute!! Love the calendar!!!

I love them all! The angel is my favorite!

Such a CUTE idea!!!!
Lisa countrychickl@hotmail.com

Wonderful job!! I am in love with the martini riley! What a way to bring in the new year! Adorable

just great. Love them all

I loved the calendar. I liked all the different borders.

these are ALL incredibly cute Rileys and not one is cuter then the other! your calendar is sweet!

these are ALL incredibly cute Rileys and not one is cuter then the other! your calendar is sweet!

Love the calendar!!! I am so inspired now! Thanks!

I want this calendar! It's so cute what a great job!

this is just absolutely adorable..love love love it!!

I really enjoyed all the calender pages! It gets me inspired to do something like this for my daughter, who is also a big Riley fan!

Love your book! I think my favorite is the snowball Riley!

Very cute! I have been thinking of making a calendar, thanks for the inspiration!

what an AMAZING job. I just love your calendar. Thanks for sharing, Tanya R.

Awesome calendar. Bouncy Ball Riley still cracks me up :D and it's great to see these all showcased.

Oh my goodness gracious, you have been hard at work showing these gorgeous Riley and Sophies! What an absolutely amazing book - so creative and wonderfully crafted, showcasing each one perfectly on their month! WOW! Lovely ornanment card - your blog post has a whole lotta smile going on! TFS!

This is just the most perfect idea ever! Thank you for providing the download info for the calendar page.

Love love love this idea. Great for a holiday gift or any time of the year gift.

ADORABLE Frances! C,mon up to Canada in January and Cindy and I can test that snowball theory on you!

Ahhh Frances this takes me back. All those calendars, as usual this one is just great and so portable too. Loved looking at it.

Frances, your calender book is so fantastic. LOVE it !!

Your date book is incredible! LOVE Snowball Riley! Thanks for sharing your work!

WOW! Love how you did the calender!! The Rileys used are SO cute!

Love Riley....especially Antler Riley...Thanks for the chance to win some freebies!
LOVE YOUR calendar idea!

What an awesome project! I love it and all the stamps you used! Thanks for sharing!

I love this, thanks for the idea, that would make great gifts!

Oh my goodness, this is adorable!! Riley is soooo cute! I am new to these stamps,how have I missed them?!

The calendar is stupendous! LOVE it! and the layout and Riley image use is great! Fun to know that your seasons are different from US!

So fabulous Frances! I am loving that calendar!!

what a fantastic calendar idea!

These are just the cutest projects ever! What a wonderful way to show off Riley!

The calendar is adorable. Another great idea!

WOW .. your calendar book is amazing ..love all the Riley's and such a great idea

That book is fabulous...love all those punches, must get me some, lol....your work is fantastic and breathtaking as always!

all I can say is WOWZA