Smile … While You Still Have Teeth! 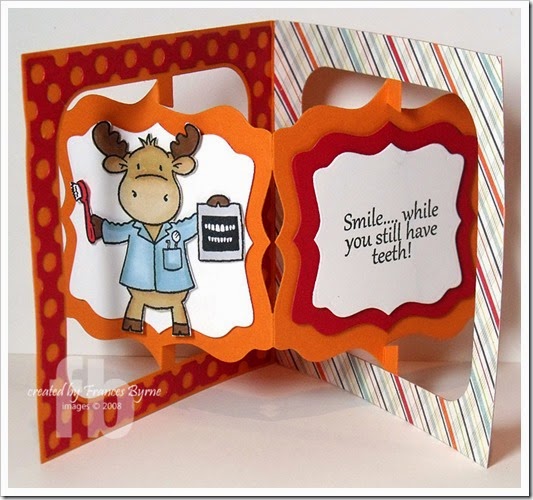 I recently had an infected front tooth which had to be removed by my dentist. Of course being a front tooth this meant that I would have to get a plate made so that I could get a new front tooth. I was all set to get my tooth out and before we got to it I asked whether the new tooth would be ready before a Paper Craft Show I was attending where I would be demoing the Pop It Ups dies designed by Karen Burniston’s for Elizabeth Crafts Designs. Anyway he said no and once I told him why I asked he advised me to wait until after the event which we did.

I got my new tooth on Tuesday and wanted to give him a card as a thank you and also so he understood what I had been doing that weekend. So I used the Riley and Company My Dentist Told Me Clear Stamp set and the Fancy Label Accordion Card die to create a card for him. 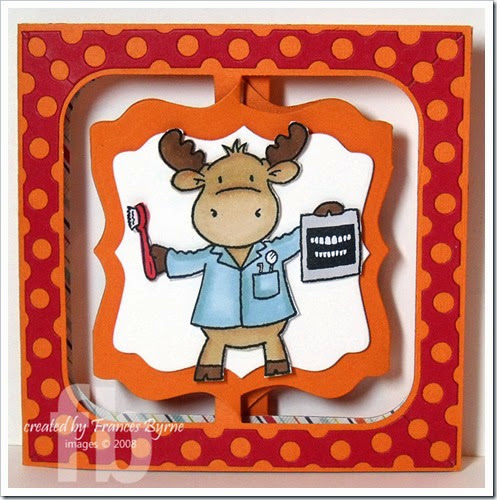 Here is the front of my card, when the card is closed ready to be placed in an envelope. I also used the dots frame edge die from the new Fancy Seasons Frame Edges set which will be available mid July.

LOVE this card! That die is so cool- and Riley and the dentist stamp- so darling!!!

I'm a big Riley fan as well as unusual card styles, so this is another win win for me to love and be inspired. Your dentist sill so love this card!

Most people tend to avoid the dentist, or just be civil with them during visits. So your dentist must have been quite pleased to receive this from you! Anyway, it's too bad you had to replace your front tooth. Your dentist was right when he told you to wait, as you could have been in a world of pain if he did the procedure before the event that you attended. Doing if after the event means you can adjust without minding other things. Thanks for sharing!
Bettye Primm @ Back Mountain Dental

I would have sworn I commented on this one before.....LOVE the fun sentiment

Hi Frances, was just wondering what your dentist thought of the card. I think it's adorable