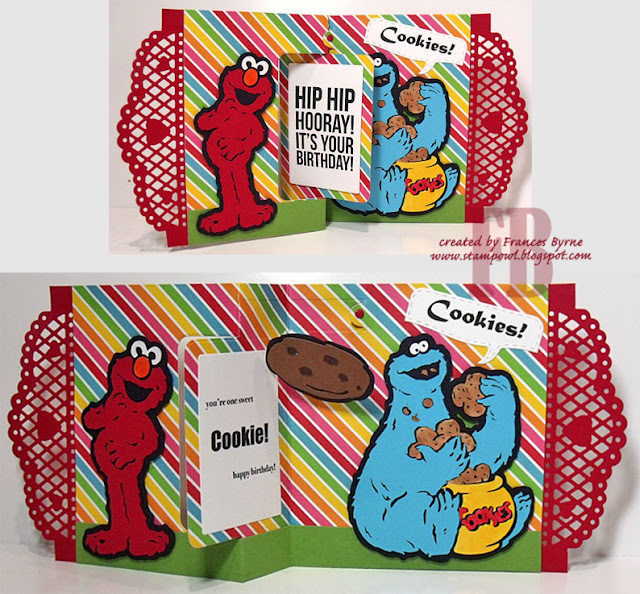 It's challenge time with my friends over on the CCEE Stampers challenge blog. Being the November hostess, I continue to issue the challenges this week.

Apparently the 10th November was Sesame Street Day, this year celebrates 46 years since the show started. So for our challenge this week we were to create a card the is inspired by this show … You could feature any of the characters from the show; something related to a character eg garbage bin or cookies; or feature a letter of the alphabet etc.

I can remember sitting with my kids when they were little watching this show, and I guess now my daughter has done the same thing with my Grandchildren.

I have seen a number of Sesame Street related cards on Pinterest using scallop circles etc and I debated whether I tried one of those style of cards or use one of the Sesame Street Circuit Cartridges I own. As you can see I went with the latter. After the last disastrous adventure I had with my Circuit Imagine, I asked my daughter if she wasn't using my Expressions could I have it back, because at least I can use that with the Gypsy which was just sitting there doing nothing. At least with that I can set out the mat with different colors. It was a much better experience, thank goodness. I even have a few extra Elmo's & Cookie Monsters because until I had my characters I wasn't sure what type of card I was going to make so what I would need. 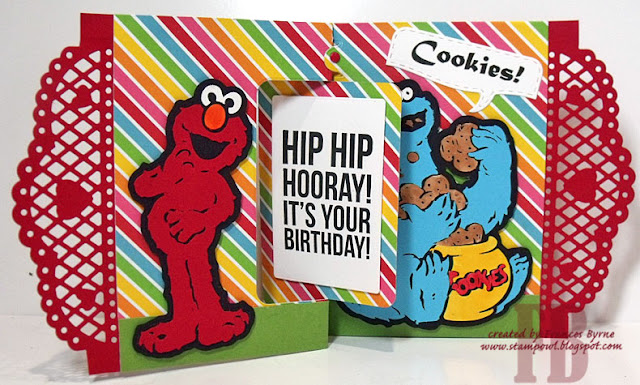 As you can see, I decided to create a Pull Card using the Rectangle Pull Card designed by Karen Burniston for Elizabeth Craft Designs. This card is quiet a large one using the full length of my designer paper.

As my designer paper was too thin to use on it's own and I wanted it on both sides, I folded it in half first and then applied Transparent Double Sided Adhesive Tape 152mm to the back of one side and adhered the two sides to each other. This makes the designer paper strong enough to stand on its own. 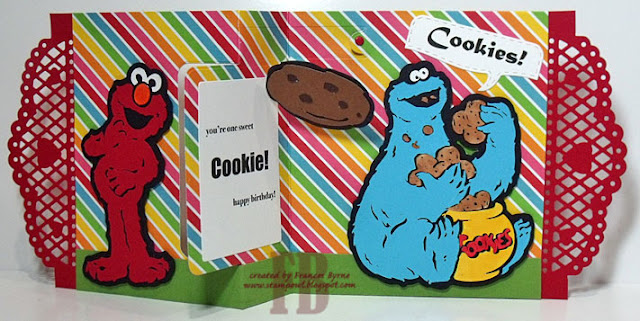 When you "Pull" the card open, it reveals a cookie related sentiment and a cookie which is attached to a spinner (also included in the Rectangle Pull Card die set). I added to decorative edges to each side of my card.

Not one, but two characters! What a happy, happy card!

This is so awesome, Frances! I love this sensational Sesame themed pull card!

Your cards never cease to delight everyone, and this is no exception with its bright colors and playful design!!

Frances, you make the most fun and really awesome cards. Love the characters and the stripes, but most of all the RED!

What a cute, cute card, Frances! Thanks for the info on doubling up the designer paper to make it strong enough for a card base. I'll have to remember that in the future!

Love love love. Great idea about adhering the patterned paper together too!

bright, bold, and oh so much fun