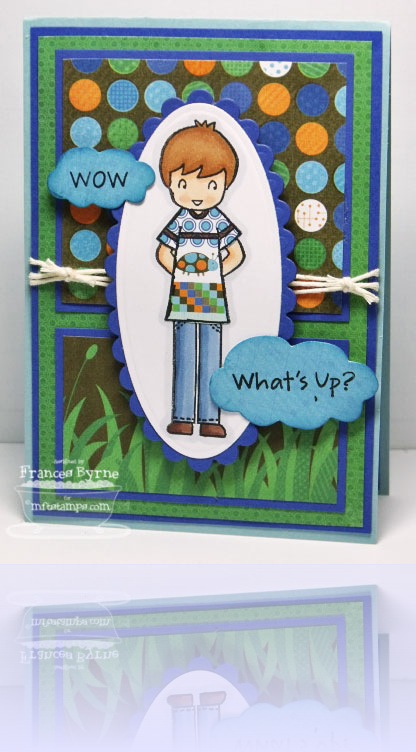 It’s day 3 of the MFTeasers, in preparation of the release of the new stamp sets which are all due to be released by MFT Stamps this coming Wednesday 2nd June.

Today the Design Team are featuring three of the new stamp sets that will be released, these include: “Fred Bear has a Butterfly”; "Emma Blowing Kisses" and "Wyatt Says WOW"

For my first card I am sharing with you all today, I have used “Wyatt Says WOW”. Isn’t he just a cutie! I used a recent SFYTT sketch challenge for the layout of my card. I used the Die-namics Cloud Trio Die for the sentiments on the front and inside of this card. 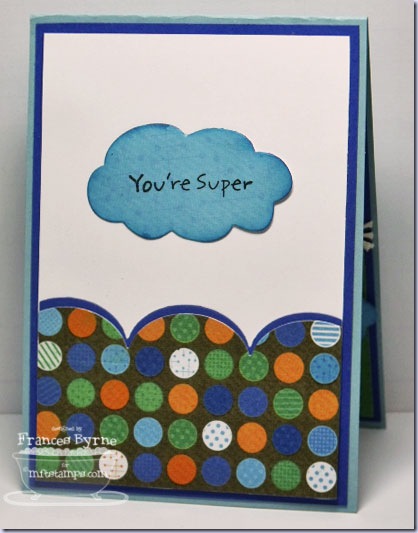 Here is the inside of my card. Besides the sentiment I used two of MFT Stamps Die-namics Dies, the Cloud Trio and the Jumbo Scallop Die. 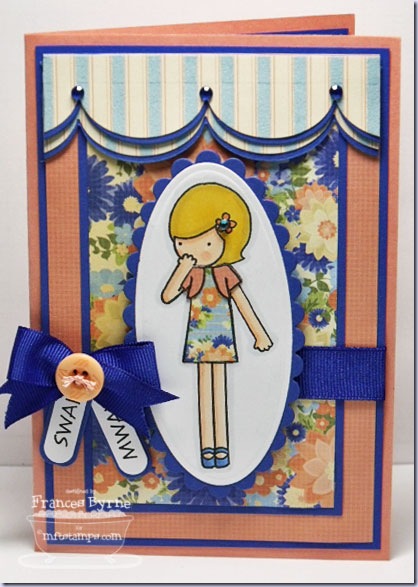 For my second card I used “Emma Blowing Kisses”, another cutie!!!! The little tags under the bow spell “SWAK” & “MWAH”, unfortunately you can’t see the last letters in the photo but you can in real life. I used the MFT Die-namic Jumbo Scallop Die to create my scallop border at the top. The dress and jacket are both paper pieced using the designer paper I used on the card. 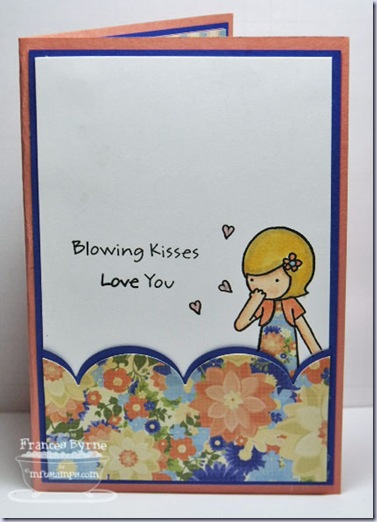 And here is the inside of my card. I stamps Emma again in the lower right corner of my card and created a scallop border using my Die-namics Scallop Jumbo Die. The sentiments and tiny heart are also included in the set.

Before you go .... don't forget this month's MFT Stamps Guest Designer Challenge. Challenge entries will be due Tuesday, 1st June, by 10 pm EST. To be considered, upload to SCS using keyword: MFTGUESTDT0610. The winner will be announced in the release party thread on 2nd June.

Want to see even more MFTeasers using the three sets that the Design Team are featuring today, then hop on over to Kim’s (MFT Lady) blog to see the list of which design team members will be featuring a card/project on their blog today. Kim will have the list posted to her blog at 11am EST.

These are both gorgeous Frances! Love them!

Love them both, Frances! Your paper piecing rocks!

Frances, these are totally adorable, inside and out! Those paper pieced outfits are fantastic! :)

HEY NEW GRANDMA!!!! how does it feel to have that little guy to love?? CONGRATS!!! and about your cards.... I LOVE those PP-outfits, and those FAB scallops!! Adorable cards -as always!!

Both fabulous Frances! I love all those layers of scallops on your Emma card!

These are both so cute! Love the fun papers and colors and the images are adorable!
Hugs, Christine

They are both fabulous!! Love your color choices!!

This is very pretty Frances, love the colors and the sweet images! HUGS and happy week!

Love these! Love how you paper piece Wyatt's shirt and love the scallop valance on the second!

AHAH!!! Wyatt has a bug on his shirt. Perfect piecing on that!!!!

Both cards are SUPER DUPER!!!!

The dienamics you used are wonderful on these cards!

Frances the bug on Wyatt's shirt is adorable, that paper is just perfect! I am loving how you layered the scallops on Emma's card, fabulous! Amazing cards!

Love these, Frances! The paper pieced clothing looks awesome - that is one seriously cool shirt Wyatt is wearing!