It’s day 2 of the sneak peeks of the new Riley stamps that will be released by Riley and Company, this coming Thursday 23rd September.

Today I am featuring the new “Franken-Riley”, …. doesn’t he look spooky hehe!

For my project today I decided to create a gable box to hold some Halloween treats, liked these severed finger chocolate treats I used here. 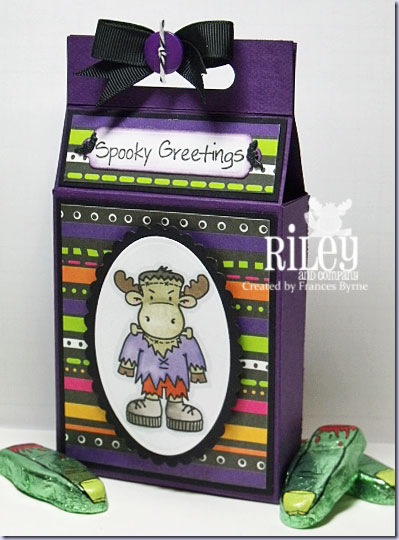 Here is another view of my Franken-Riley Gable box …. see the cute little bat brads I found recently! 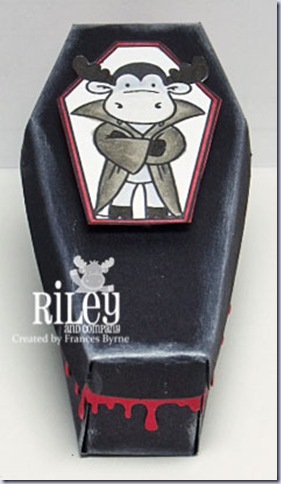 For my second project today, I would like to introduce to you ….. Count Dracu-Riley … another spooky character!  For this one I decided to create a coffin box, I created one of these a few years back but this time round I scaled it down to suit the image I was using. 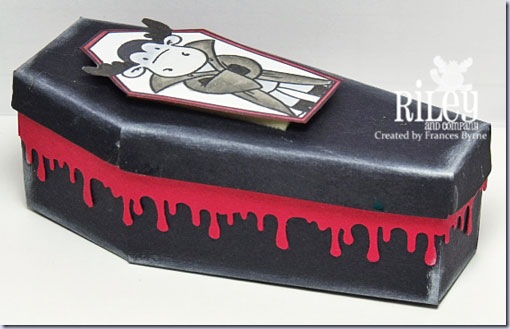 I decided to add some blood around the sides of the coffin, to fit in with the fact that this was Count Dracu-Riley. The edges of the box are sponged using white ink. 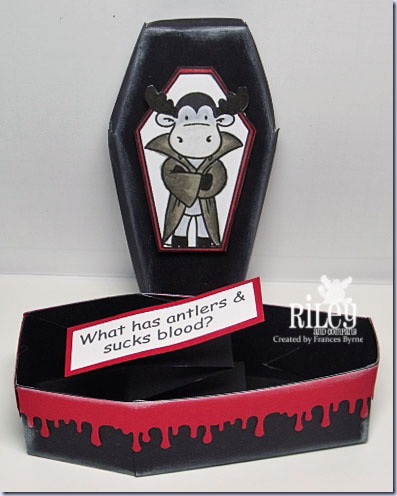 Here is my box with the lid off … I have attached a sentiment to a piece of concertina card so that it pops up when the lid is removed. This sentiment comes from the Moose Sayings 1 set …   the sentiment actually continues to say Moosequito as the answer to this riddle …. but it also fits in very well with this image don’t you think.

The rest of the Riley and Company Design Team will also be sharing their cards they have created with you this week, so don’t forget to check them out too.

I will be back again tomorrow with another sneak peek to share with you all. Don’t forget the Riley & Company Blog hop which will be held on Thursday 23rd September starting at 10 PM EST.

OM, this is very cool Frances, love them both! HUGS

I just love these Riley's I need them too LOL... Your cards are adorable.

I love them both!!!!!!!! Your colors are wonderful! And I LOVE the goo punch around the coffin! FUN!!! Perfect for FrankenRiley and Count Riley!

WOW Frances!! I love them both. I do love the detail that you added to the little coffin box with the drippy goo punch. Fantastic!

Perfect! Love it! Just wanted to let you know everyone at Riley HQ (Stampers Ink) is talking about your wonderful projects. They are such a hit!
We have loved your sneek peeks all week!

Oh these are both fabulous Frances! Love those fingers!