Riley's In The Lockup! 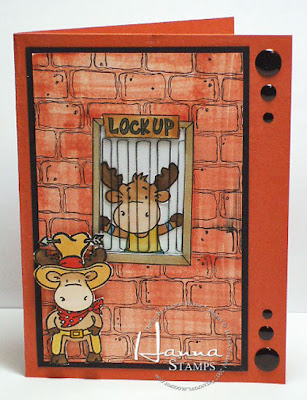 Riley has gone and done it now! Just look ... he has gone and got himself put into the lockup LOL!!!!! Poor poor Riley I wonder what he did????

I created this card using one the the new sets which will be released after the Hanna Stamps release party this Thursday 5th February. This set is called "Busted" and features Hanna and also the lockup image. I couldn't resist using it to create this little scene!

I started by stamping the "lockup window" onto my white card and then masking this and stamped the bricks all over the card. I also stamped the lockup window onto acetate and set it aside to dry. I stamped aerobic riley & cowboy riley and cut them out so I could put them in their appropriate places on my card.

I cut out the inside of the window from my card and then layered the acetate window under it and place aerobic riley so it could be seen through the bars.

I will have a couple more cards using the Hanna image in this set later in the week.

Oh no poor Riley, we need to bust him out. Hee hee great card Frances.

This is Hilarious!! Way cute!

How cute is this!!! Your card is fabulous!!!

Adorable! You did a great job on this!

how stinkin adorable is this...love it

The Crazy Life of a Navy Wife said...

This card is awesome!!!

You're right, it DOES go with my card! LOL!!

Very creative and so adorable Frances!!

How adorable is this... LOVE it Frances! Jennifer :)