You Make My Heart Dance! 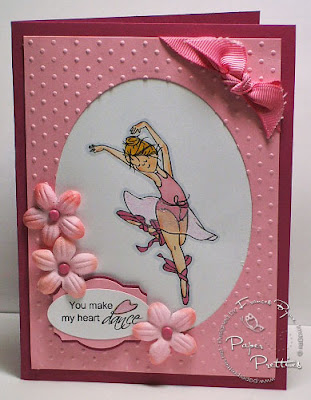 It's Prettie Tuesday which means I have another Paper Pretties card to share with all of you. This week I just had to create another card with the new "Sophia Ballerina" set which will be the Stamp of the Month for March. Members of the SOTM club will receive this image in March ... if you aren't a SOTM subscriber you will have to wait until April until you are able to purchase it ... makes becoming a subscriber worth it ha!

The pretty in pink panel used on this card was a left over from another card I made which I will be sharing with you later in the week. I cut out the oval for that project and I had cut it out so that is was centred on the card (fluke believe me hehe) ... but it was just calling out to be used for the card so I decided to use it with Sophia! I used the swiss dots cuttlebug embossing folder to add texture to that panel.

If you look closely you will see that I used shimmerz to add some shimmer to Sophia's tutu.

A really pretty card!!! I love the colours and layout!!!

What a pretty card! It is so feminine and delicate!

She looks so happy awesome work.

What a gorgeous card & such a lovely stamp!

This is gorgeous Frances!!

Both of your cards are so pretty! Love Hanna image! So many ways to create and give her a different look!

So pretty Frances - love the Shimmerz! :)