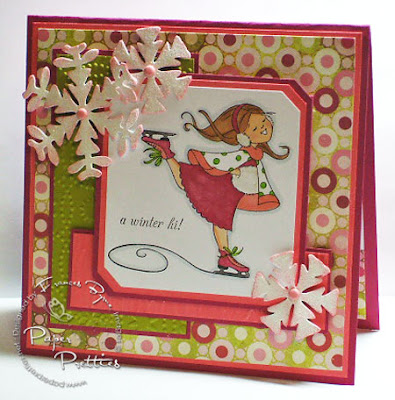 Welcome to our Pretties Wednesday challenge!

I don't use a lot of Cameo Coral and I don't think I have even used any of my Kiwi Kiss up until now so I did have to think about this for a bit.

I used "Gliding By Sophia" to create my card. The layout for this one is Jen of Iheart2Stamp's SFYTT sketch challenge from 7th February. I used my cuttlebug embossing folders to create the texture to the kiwi kiss & cameo coral panels. The snowflakes are cut from white glitter paper using the cuttlebug snowflake die ... this is a large snowflake ... to get the smaller ones I just cut off a few of the little flakes around the top and then I sponged around the edges of the snowflake with cameo coral ink.


Don't forget to check out what the rest of the Pretties girls created for this challenge:
Paper Pretties will be releasing new stamps on March 1st so that means it is time for another CUTIE PIE CONTEST!!! All you have to do to enter is upload a card you have made using Paper Pretties stamps to the Cutie Pie Contest gallery over at the Paper Pretties website. Entries must be in by no later than 8pm CST on February 28th to be considered for the prize. Besides getting to call yourself a CutiePie, you will also receive all the new stamps that are released on the 1st!! Good luck!!

This is just adorable. Wonderful work.

This is awesome! I love that dp!

P.S. I got to be #101 on your blog followers:)...That's a little funny since I've actually been following your blog for over a year...but now I have the honor of being 101!

This is just gorgeous!! Love the snowflakes!! ;)

Awesome job on the challenge Frances, so pretty.

Like most of your adorable cards, I love this card too Frances. Great details and colors/coloring and DP. And those snowflakes ROCK. Great idea to sponge for added depth and cut off the smaller of the larger ones. TFS

GORGEOUS Frances! LOVE the layout and the AWESOME dp you used on this!!!

Ooohh! I love that you chose non traditional "cool" colors.....this is fabulous!

This is totally fabulous Frances..you totally rocked the color combo!!

great card Frances, you did a good job with these colours

I love this card Frances!! WHat a great set to use with this color combo...I never would have thought of it!

Fabulous! I love that layout and the big snowflakes sponged with pink!