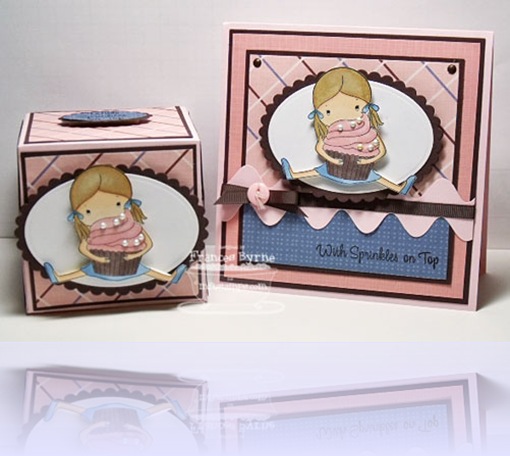 It’s release day over on MFT Stamps, which means it is time to join the MFT Stamps Design Team for another "Blog Hop and Shop!".

The hop started at Kim's (MFT Lady) blog so if you didn’t start from there you may want to head over there now so that you can start at the beginning of the hop. You don't want to miss anything and believe me there is lots to see!

I am featuring the new Jolinne stamp set that is being released today: 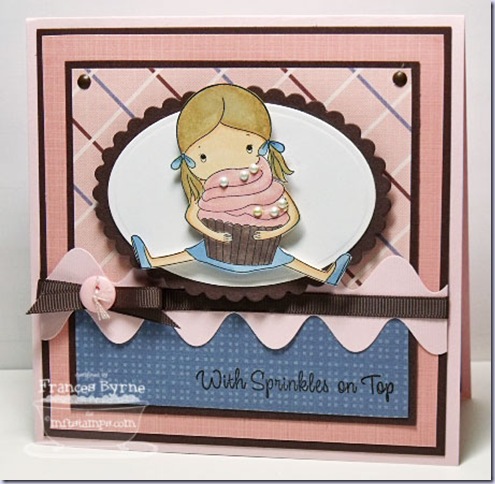 First let’s start with my card! I just love this cute image, wouldn’t you just love a cupcake that was almost as big as you hehe … forget the calories LOL! I stamped Jolinne on white card and cut her out to sit onto an oval panel. I added Swarovski Crystal - Princess Pearl Collection to the top of the cupcake as sprinkles. I also used the Die-namics Ric Rac Die and Grosgrain Texture Plate. 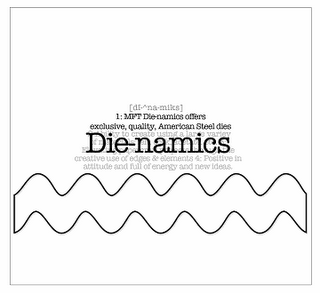 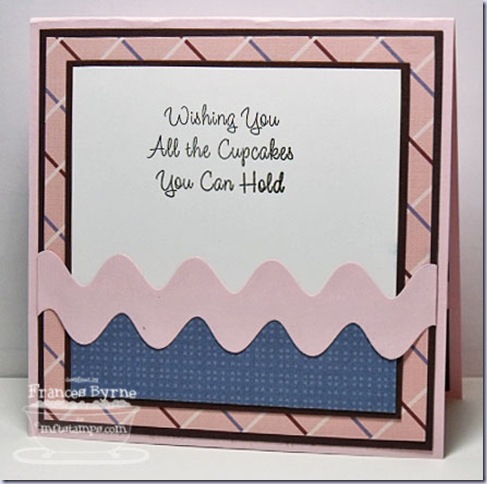 On the inside of my card I added one of the sentiments which is included in the set, as well as adding the zigzag border again using the Die-namics Zigzag die. 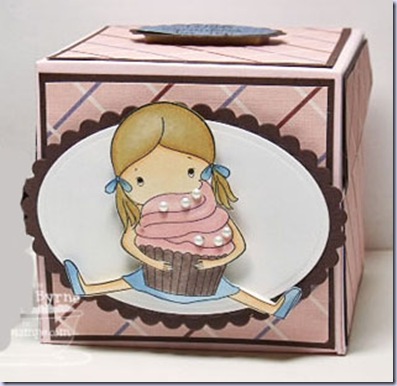 I also wanted to create a cupcake box to hold a cupcake so that I can give a cupcake as a gift as well as the card. Or I could put something else in the box if I didn’t want to put a cupcake. Here is another view of my cupcake box closed so you can see it from the top. 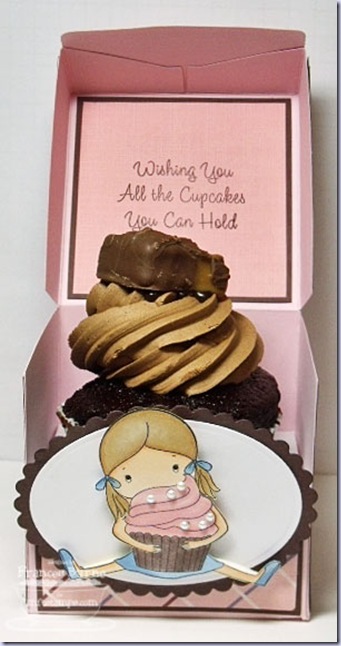 And my cupcake box open, and of course I couldn’t resist putting a yummy cupcake inside it hehe …. and yes I have eaten it now :) and it was yummy!!!!! I used my cricut and SCAL to create this.

I attached the Jolinne image to the bottom part of the box so that when the box was opened you could still see Jolinne on the front. 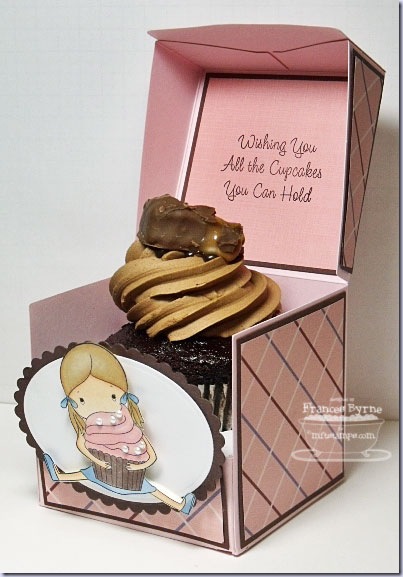 And one more view of my open box, this time from the side.

Well that is about it from me for today, now it is time to hop on over to the blog of the marvellously talented Jessica Rone and see what awesome creation she has to share with you today.

Enjoy the rest of the hop and thanks for dropping by! Don't forget to leave comments on all the blogs, you never know who may be giving away blog Candy!!

I would have eaten that cupcake too! So very sweet.

Wow! That cupcake looks so yummy! Want to send it my way?

This is so sweet Frances! What a fantastic ensemble! And that cupcake looks so YUMMY! :D

oh she is so darling! what a fantastic set!! you make the coolest boxes/3d projects! that cupcake is pretty amazing too LOL!

I just love how you've added "sprinkles" to the cupcake! Absolutely adorable!

Absolutely adorable cupcake card and box--love the colors you used.

Oh no, you made me hungry!! lol This is super cute!!

deeelish in image, design, and contents...wow

You could have at least offered me your fingers to lick!!! LOL

Ummmm....i want me some cupcakes now. Cute cupcake holder and the perfect card to go with it.

I love your cupcake box- it's the perfect project for that image... and the cupcake looks amazing, too!

Wow!! Sooooo beautiful! Great colors and what a sweet box!

That lid is so NOT closing on that huge delish cupcake!!! You better eat it...LOL! This is darling girl!

What a perfect gift set! I love the cupcake box.

omg! this is sooo sooo cute and yummy and wow! I want that cupcake, it looks sooooo GOOD! great work, tfs!

YUMMMMMMY! Love your project Frances....actually I would really love that cupcake right about now!

EVERYTHING looks YUMMY!!!!! Love that card and box, and the cupcake, OH MY!!!!

Fantastic set Frances! The card and the cupcake box look almost as fabulous as that yummy cupcake and that's saying a lot!!!!

Wow!!! Just beautiful!!! I adore all the fun colors and papers and the use of the dies is incredible! But the box! Wow!!! What a great idea. I have to say though that I can't take my eyes off that cupcake!!! Yummmo!!!!

Super cute projects my friend...and can you send that incredibly delicious cupcake over this way??? I could use a chocolate fix today!! :-)