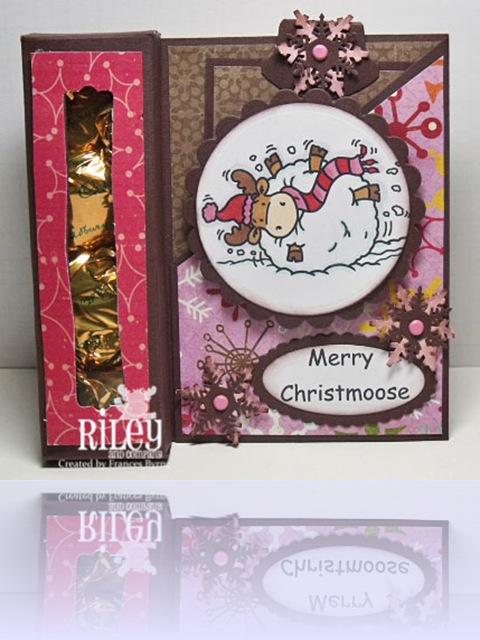 I am back again today with two more projects to share with you using the new Riley and Company stamps which will be released this coming Thursday 18th November.

It is also challenge time over on the Riley and Company blog. This week it is Laurie Clout’s turn to host the challenge and she has given us an Outdoor theme. 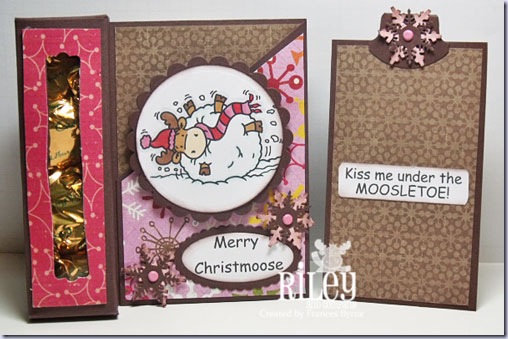 Well I don’t know too much about any activities to do with snow seeing it doesn’t snow in my neck of the woods…. but I think it is safe to say that Riley rolling down the hill in a snowball would only happen outside right hehe!

This project is a Treat Card Box that was one of the projects for the Holiday Tutorial Blitz over on SCS recently. You will find the instructions for this in the resource section of SCS.

The Merry Christmoose sentiment is from the Moose Sayings 1 set that was released a few months back. I stamped it so the sentiment was in two lines rather than one line so it would fit into the oval. 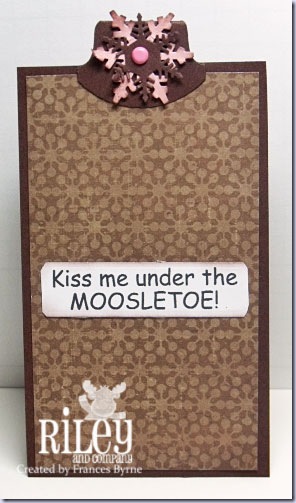 Here is my tag that slips into the pocket of this card, the sentiment is from the new Moose Sayings 2 set which will also be released on Thursday. 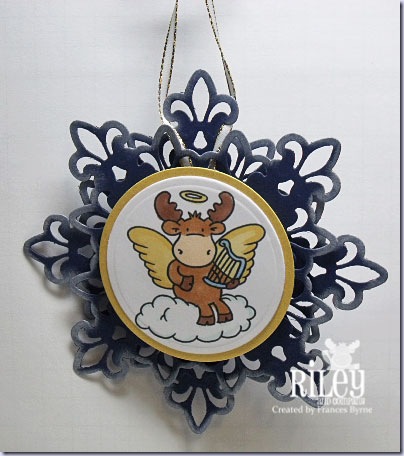 For my second project I decided to create a Christmas ornament, this time using Angel Riley. Again I think this one is covered by outside … clouds are outside last I checked hehe!

I used the Fleur de lis die from Spellbinders to create the base of the ornament and then layered my image on top of that.

Don’t forget to check out the rest of the Design Teams blogs today so see what they created for this challenge, I am sure they will also be using some of the new stamps that are being released this week.

I will be back again tomorrow with another sneak peek to share with you all. Don’t forget the Riley & Company Blog hop which will be held on Thursday 18th November starting at 10 PM EST.

Love them both, they sure would make great gifts!

These are sooooo fun! I absolutely adore the ornament and that box! You are totaly rocking this release! THANKS!!!

Great projects!! Love the first image so much!

Loe your Candy treat card with the pull out sentiment, awesome idea. Your angel ornament is beautiful, I need some moose on my Christmas tree this year. Beautiful.