It's challenge time with my friends over on the CCEE Stampers challenge blog. Being the hostess for the month I continue to issue the challenges.

Did you know that the 25th January is National Opposite Day?  For our challenge this week make a card/project that has opposites on it. Think opposite colors on the color wheel, stripes and polka dots, black and white, mirror image, etc. 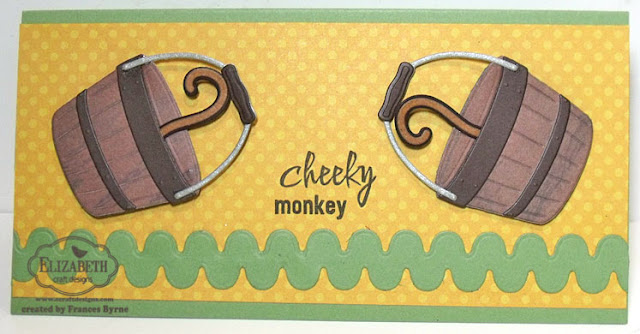 I am making use of a card I made as a sample for CHA for this challenge. The buckets on the front of the card are mirror imaged to each other. 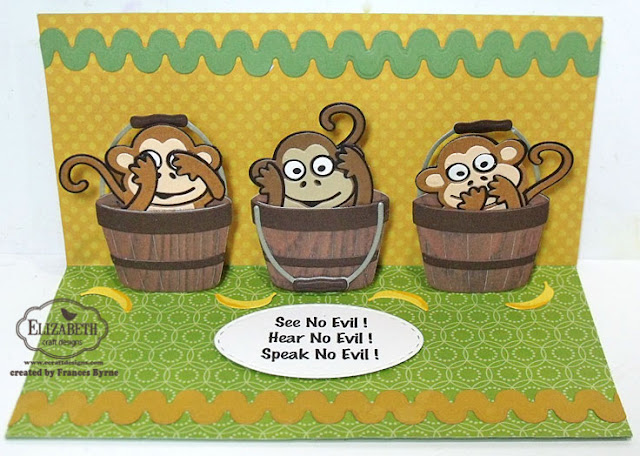 As you have probably been told a dozen times by now .... I LOVE the new Jinks the Monkey character die which is one of the new release dies designed by Karen Burniston for Elizabeth Craft Designs and released earlier this month.

Once I received this die, I had this idea in my head that I just had to get down onto a card ... make a card using the Three Wise Monkeys ... See No Evil!; Hear No Evil! and Speak No Evil!

I die cut Jinks the Monkey three times and assembled each of the characters ... I chopped the bottom portion of the body of as I didn't need that. I also die cut three of the Barrel Buckets and then placed Jinks inside each so only his tail and head showed. Before placing Jinkz into the buckets I also cut off his arms so that ones in the bucket I could reposition these so that the arms covered his eyes; ears or month depending on which wise monkey it was.

The ric rac piece on the top and bottom sides of the card was created using the die in the Pull Card Edges die set. 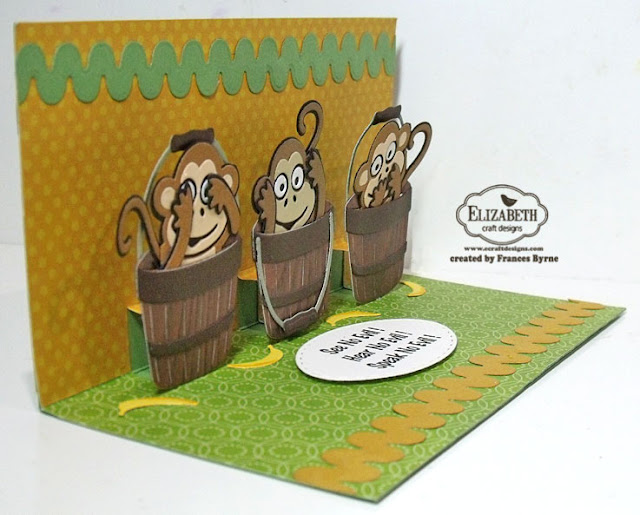 Of course this is a pop up card .... the Barrel Bucket Pop Up Card set .... comes with a small pop up die to use with the barrel bucket if you wish ... this is perfect for being able to place a pop up exactly were you want it.

This is a fairly wide card so I did need to use my Big Shot Plus to die cut the pop up portion. If you only have a 6 inch die cutting machine you can get around not having a wide machine, by folding the base card in half and placing the score line of the pop up on the fold of the card.

Don't forget to check out the CCEE Stampers blog (goes live 12 AM EST) to see the rest of the creations the CCEE Stampers created this week. You can also see more details of their creations on their individual blogs:
Anne Harmon
Joanne Grzelak
Liz Williams
Lois Bak
Lynn McAuley
Maryann Einam
Vicky Gould

What a fun card, and the mirror image of the buckets is so delightful!

Such a cute, cute card, Frances!

How cute is this!!! Such a fun card, Frances.

Wow, so full of opposites here. Love the buckets on the front with one leaned over to the right, the other to the left, and one monkey tale curled up and the other down. A great design down to every little detail Frances. That is what makes your work so outstanding every time.

Oops, that should have been tail. I should proof-read better.

What fabulous fun with these sensational pop up monkeys!! I love this card, Frances!

totally full of fun and opposites

So cute, I totally love Jinks the monkey, fantastic card