Before I get onto the details of my card - I wanted to share information of a sale from Elizabeth Craft Designs - this week from Monday 10 AM MDT to Friday they are offering a 20% discount off all  Characters and Props die sets.

Technically speaking my character isn't in costume, but I have transformed to characters to create Jellyfish. I was playing with Chilly the Penguin and Rocky the Crab trying to see if I could create a bat and all of a sudden I could see a Jellyfish so that is what I went with to create my first card for our challenge. 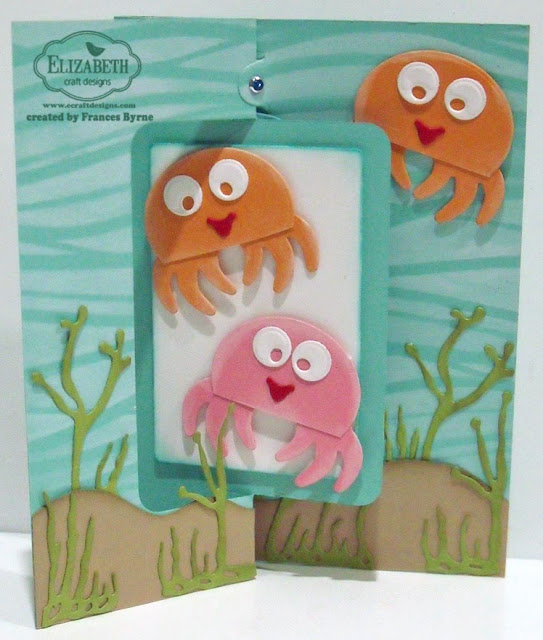 To make my card I started with an aqua card and used the Rectangle Pull Card to create a Pull Card. I used a stencil and Picket Fence Distress Ink to create the waves.

Next I used the Beach Edges die set and used the sand to create the bottom of the ocean. I wanted to add seaweed to the ocean floor, so I used the grasses from the CountryScapes Country Flora die set for this.

To create the Jellyfish I die cut the head and eyes from Chilly the Penguin.  I also die cut the smaller claws from Rocky the Crab. I cut the head so that the bottom was straight and then cut the claws so I had two pieces and glued these under the head. I then added the eyes and for the mouth I used a die from Brownie the Cow. For the eyes and mouth I used Transparent Double Sided Adhesive Tape to the back of my card prior to die cutting. 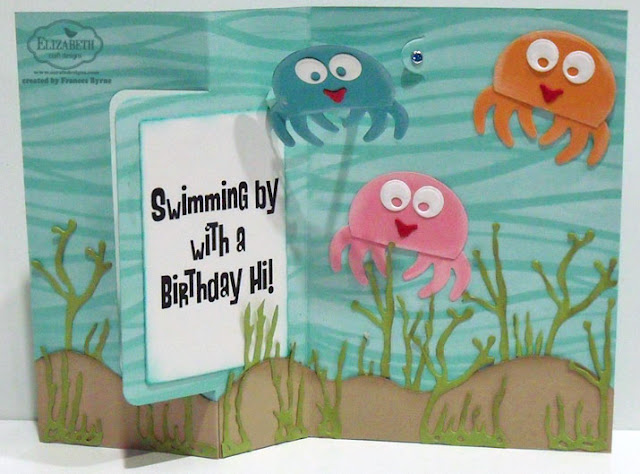 When the card is "pulled" open it reveals the underwater scene. I created the sentiment using my computer and added one of the jellyfish to the spinner die that comes included in the Rectangle Pull Card set.

To finish off the card I added a Turquoise Glitter Dot Peel Off Sticker to the closure piece at the top of the card.

If you are looking to purchase Karen's Pop It Ups dies in Australia you can find them at Craft Giraffe(formerly Photo Continental).

Don't forget to check out the Elizabeth Craft Designs blog on Wednesday when you will be able to see what all the designers created for the challenge this month, plus an amazing card/video tutorial from Karen Burniston.

I will be back tomorrow with another card I created for this challenge.

I just love how you create scenes on these cards

Frances - I have no idea how you came up with this - unbelievable cute jellyfish. Wow! LOVE LOVE LOVE this card.