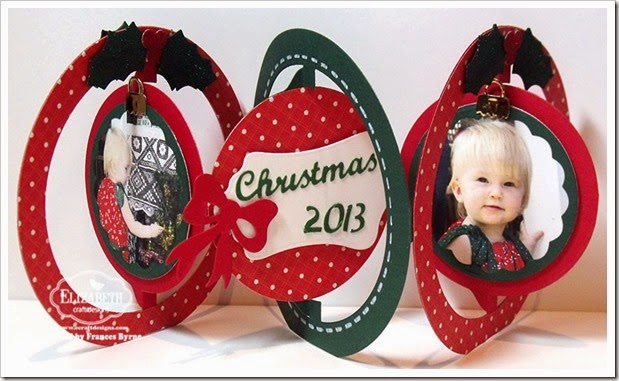 It’s time for our May Karen Burniston Designer Challenge, this time round for our theme Karen has asked us to create Photo Accordion Albums - here's your chance to show off the people you love or your favorite things or your ancestors or garden or pets or . . . doesn't matter. Make an Accordion Album that showcases at least one photo. Any length album, any shape album ,any theme album, but get a photo or photos on there!

Do you spy new dies!!!!!!!!!!!!!! You do!!!!!!!!!!! Today I am using the new Ring Accordion Album die set designed by Karen Burniston’s for Elizabeth Crafts Designs which will be releasing in July. Can I say I love love love this new die set! I have gone with a Christmas theme for my card/album today, but of course this die can be used for any occasion you want.

When I first read our challenge for this month I thought Christmas, but then had to ask both my daughters to photo stream me Christmas photos as the ones I had weren’t that great. I was going to feature both my Grandchildren on my card, but I ended up just using photos of my Granddaughter, Hayley. 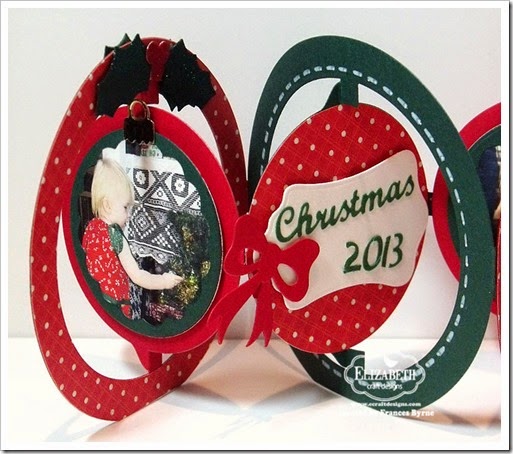 Here is a close up of the first two pages of my album. I also used one or two of the dies from the Circle Accordion Card die set to create the frame around the photos.

The Ring Accordion Album Die comes with two different sized ornament hangers in it. I used the smaller of the two which I die cut from Gold Shimmer Sheetz to add to the top of both my “photo ornaments”

On the top of the two outer rings I added some holly which is included in the Tag die set. I die cut my card which I had already placed double sided adhesive to and then used Regal Green Silk Microfine Glitter and True Red Silk Microfine Glitter to the pieces. As I need one in the reverse on the front to match with the one of the first page I die cut that holly from the back of the card (non adhesive side). 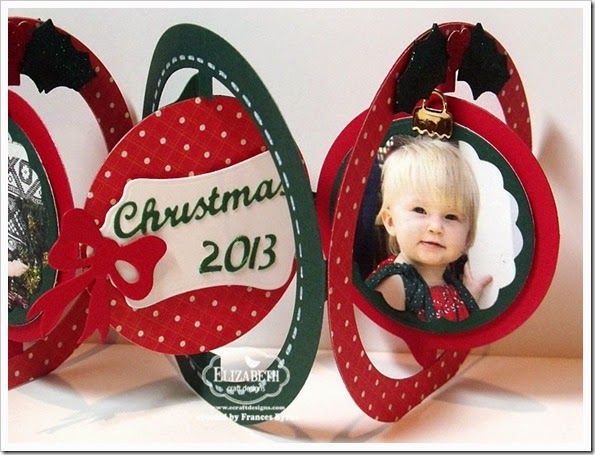 As you can see I also cut a tag using the Tag die set from white card. I used the Merry Christmas (745) word die and Green Velvet Adhesive Paper to create the word Christmas on the tag. The bow is from the Wreath Bow die set.

I decided I wanted to add the year to my tag and as these were taken from last Christmas I wanted 2013 … how to do that when Elizabeth Craft Designs don’t have numbers yet, hmmmmmmmm … I ended up making the numbers using various word dies from ECD.

To create the 2 I used the S from the Get Well Soon (790) die. I reversed the S and cut of the tail and added a straight piece from one of the l’s from the die. 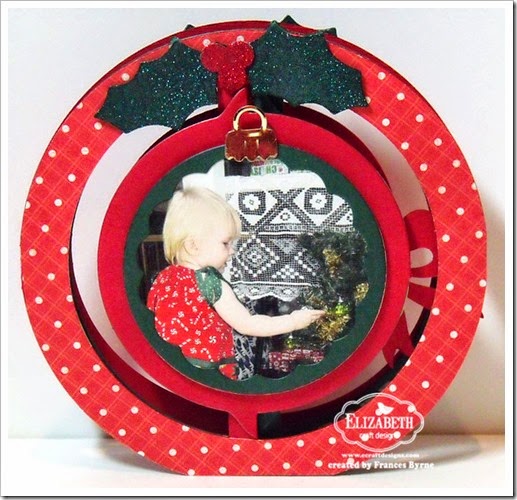 And finally a look at the front of my card when it is closed ready to be placed into an envelope. I really had fun creating this Photo Album … which features on of my favorite people

If you are looking to purchase Karen’s Pop It Ups dies in Australia you can find them at Photo Continental.

Don’t forget to check out the Elizabeth Crafts Designs blog on Wednesday when you will be able to see what all the designers created for the challenge this month. I will also be back tomorrow with another card to share with you for this challenge.