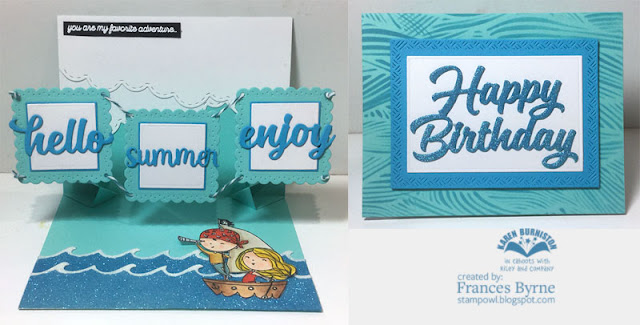 The hop started on the Karen Burniston blog, so if  you just happened to hop onto my blog you may want to head over there now so you can start at the beginning of the hop. You do want to miss anything and there is lots to see!

Karen Burniston and each of the Karen Burniston Design Team members will be offering a prize to some lucky person who comments on our blog posts, so make sure you join the hop and comment on everyone's blog post. The prize for my blog will be the Upsy Daisy Pop-up die set. You have until midnight EST 24th May to leave a comment on my blog for a chance to win the prize. (Note because this die won't be released until the first week of June, your prize will not be posted until then). 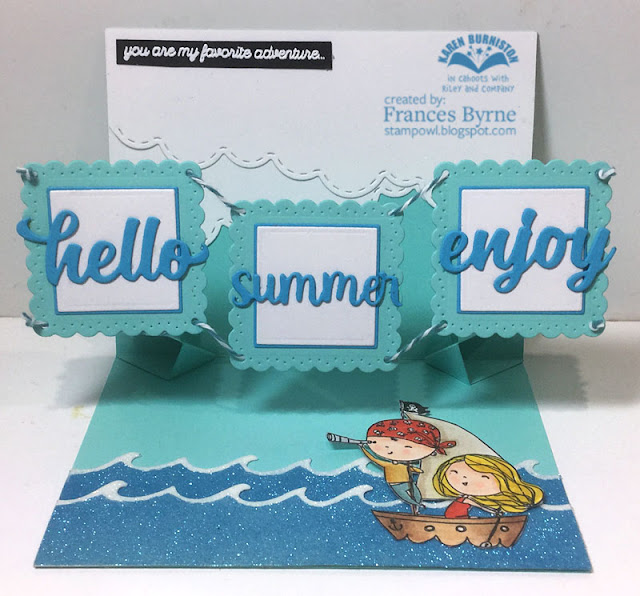 For my card today I have used Karen Burniston's new Upsy Daisy Pop-up die set to create the pop-up element of the card. This is one of the 12 new die sets which will be released in June. The two end squares are attached to the pop-up mechanism and the middle square is joined to the others using twine.

Along the bottom edge of the card I added the waves from the Tropical Scenes die set die cutting the waves from white cardstock that had adhesive tape on the front. I carefully trimmed off the release paper from the adhesive along the top wave part of the die cut above the stitching line. I then covered the adhesive with clear glitter and then I removed the remaining protective backing and covered with blue glitter.

I then stamped and cut out the boy and girl in the sailboat from Brutus Monroe's True Love Sailing Clear Stamp set and adhered to the lower right hand side of the card on the waves.


Here is a quick video to see my card in action. 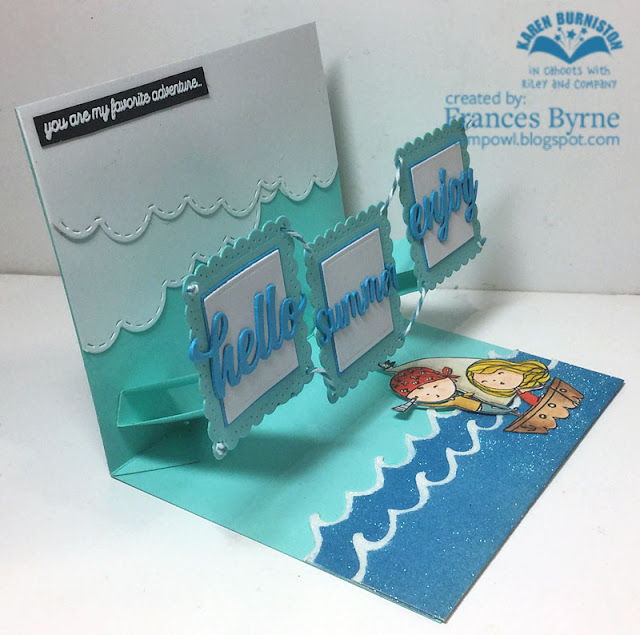 Along the top edge of my card I added clouds using the scallop cloud border from the Nature Edges die set.

I stamped the sentiment which is included in the stamp set to black cardstock using white embossing powder and added it to the top left hand corner of my card.

To decorate my square panels that pop-up I added words from the new Words 6 - Summer die set. 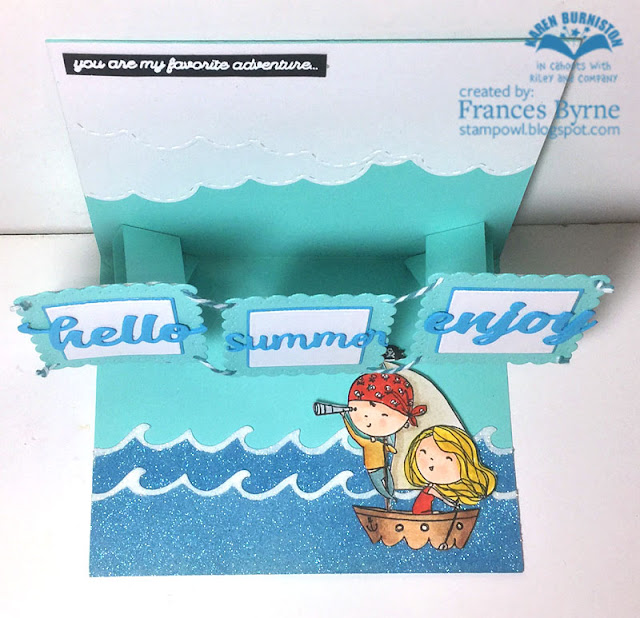 Here is an overhead photo of my card so you can see the pop-up portion of the card a little better. 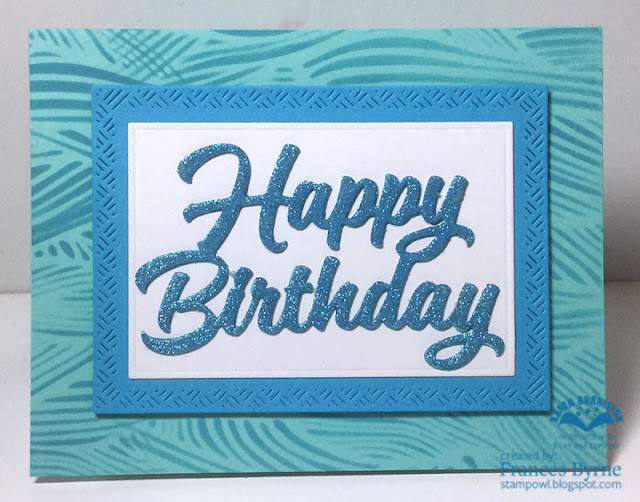 I kept the front of my card simple seeing the focus is on the inside of the card. I stencilled a background on the card base.

Well that is about it from me today, thank you for dropping by. To continue on the blog hop, click on the next person on the list which is Helen Cryer.
Here is the complete blog hop list if you need it.

Supplies:
For your convenience I have also included the links to Karen's new products being released in June which are now available for pre order.

Awesome card - Love everything about it.

So much Fun! Thanks

Your card makes me smile! I love everything about it!

Fantastic card Frances! Love everything about it!

That is one stunning card - how does Karen Burniston come up with these ideas? TFS.

So cute! I think I need this stamp set given my son just said those very words in an IG post.

Love this new die! Your colored image looks fantastic! Great use of glitter!

I love the whole card especially the glitter!!

Fabulous card Frances, you have done an awesome job at showcasing the new product.

Hero Arts Every Which Way, LinkDeli link in supply list

I can't say what I like best about this card as it is all good. Love it.

What an amazing card, Frances!! Such a fabulously fun interactive design with so many possibilities!! Remarkable work!! Love your summer/pirate theme!!

This card is so much fun. I love the little pirate people....so cute!

I just love your project! I can see so many applications for these dies! Thanks for sharing!

Love your card Frances! Anything with water, ocean. You Aussies are very talented people.

Great card! I love all of Karen's dies (and have most) and am glad to see Brutus Monroe products - a new company for me. Thanks for sharing!

Lady...YOU are the Queen of unique cards! This is fabulous! FAB-U-LOUS!!!!

I really like this one, Frances. The stencil makes a great background on the front. I love the pop-ups on the inside -- on my list!

You know your cards always fascinate me. You must have such an awesome collection of dies. Thanks for sharing the blog hop with us. Gotta get over to see all the others.

Frances, I love ocean scenes and yours is no exception! Your stamped image looks like it is floating on the water, so cool and I like how you combined new dies with old! Everything works together so well!

Love this Birthday card, the colors and the use of the new pop up. Brutus Monroe stamps are always cute and these have used marvelously.

Frances, can you tell me the size of your finished card? Thanks.

Awesome card; I thought I had all the KB dies I needed but ... nope - the blog hop has shown me there are still quite a few must haves I need to get and this is onen of them! Too cool! TFS!!

OH WOW! This card is beautiful. The colors are so great with the stamp set! Fantastic job!

I'm loving the nautical theme and those pirate kids are just too cute!

Really love your card And this new die set!

OH MY! Your card is too cute! Love the two people floating! The Upsie Daisie Pop-Up die is DEFINITELY on my MUST HAVE list!

Darling card! How fun
the inside is with the
pop ups and cute stamp.
Love the glitter waves.
Carla from Utah

Very cute and fun card. Pretty blue colours. Love the stamp and die set too. Yes, we're all waiting for summer to come.

What a fun card design. I like the sparkly water.

Such a fun idea! My grandson loves pirates so this is perfect for him. Thanks for sharing your inspirations!

Your card is so cool. The die set Upsie daisy pop up would be a great one to own.

When I first saw this Upsie Daisy pop-up die I had so many ideas in my head, that I really wanted it right away. Wow, is this a fun one.

Well this is just cute as can be. I love that you left the front of the card simple for the big surprise inside!

Great card. The Upsy Daisy die is definitely on my wish list!

Loved that stamp since I first saw it. Your card is perfect. Love the boat sailing on the waves, the three pop ups is the cherry on the top!!! . I love that pop up die and it's on my to get list. It is so amazing when opened. Thank you for sharing ur adorable card.

Love this summery card as I sit in my room trying to get warm - winter is just a few days away for me. Thanks for my glimpse of next summer.

Love this new die! Your card is so fabulous and fun. I love the sparkly ocean.

This looks like such a fun die. I love all the motion dies. Very nice ocean themed card too!

I think this is so adorable!
Thank you for sharing!

This die can be so much fun!
Carol b

Ahoy! This card is super card! The Upsy Daisy die looks like it would be really fun to play with. I like how you did the waves with the white caps.

what a fun card! thanks for all the visuals!

Beautiful card! I love the two tone waves and the glittered Happy Birthday on top. And the stamp you used is so cute! And that UPsy Daysy die looks like fun! Would love to win it!

Lovely card. I would love to win this die it looks really versatile.

Amazing card creation thanks for all your beautiful card ideas

What a delightful card! Love the glimmering sea, white-capped waves, and of corse, the seafarers.

Your card is too cute! TFS

This die set is fantastic and sooo clever !

Awesome card! Thanks for the inspiration!

Fabulous card! Such a great design. Thanks for the chance to win.

Love the way you made this look so easy. Beautiful card.

What a lovely card. I love the mechanism and the theme you used. Thank you for being part of this brilliant blog hop !

This die is AMAZING!! I love that you tied the inside panels with twine and the waves on the front and inside are terrific, too!

WOW! Those waves are just awesome; what a clever way to do them! Love the card - really does feel light, airy and summery - that die is on my must order list! TFS!

Frances, your card is so adorable!