Hello, You Always Make Me Smile 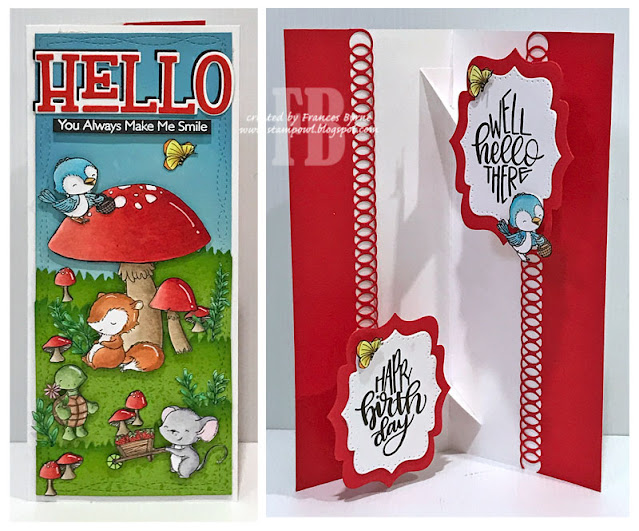 Hi Crafty Friends,
It's challenge time with my friends over on the CCEE Stampers challenge blog.  As challenge hostess for the month, I finish off the month with one last challenge.

According to the Days of the Year Calendar, September is Mushroom Month. So for our challenge this week, include one or more mushrooms either stamped or die cut on your creation.

I had hope to use one of Hello Bluebird's Slimline dies that have mushrooms included in the dies. These were released 1st August and I ordered straight away, but unfortunately due to COVID19 mail to Australia is SLOW!!!!! So it was plan B for me for this challenge, hopefully they will turn up soon.
EDIT ... Guess what arrived today, the day of the challenge ... my Mushroom Slimline dies I had wanted to use for the challenge LOL! At least they are here now and I will definitely be playing with them soon.
I did at least create a Slimline card, my favorite option right now. I used Slimline dies from Kat Scrappiness called Wonky Stitched Nesting Slimline dies, which did finally show up after a detour to Japan. Yes my dies seem to have fun travelling the world right now haha!
Along the bottom of the card I added grass using the Wonky Stitched Nesting Slimline die and MFT Stamps Slimline Grassy Hills Die-namics. I added three rows of grass, adding shading to each of the tops of the grass.

I added a die cut sentiment from The Stamp Marker called Hello Serif and then underneath this added a stamped sentiment which is from the stamp set I used on the card. 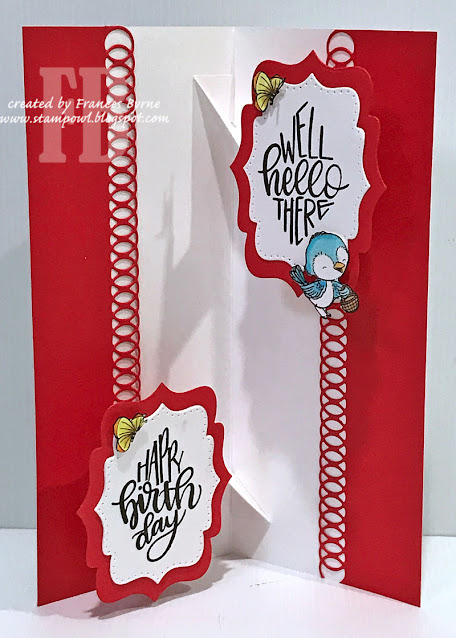 For the inside of the card I added borders to the right and left edges using Pinkfresh Studio's Slim Lacey Edgers die set.
I created a double pop up card using Karen Burniston's Katherine  Label Pop-up die set to which I stamped sentiments from Catherine Pooler Designs Say It In Diamonds stamp set.
Don't forget to check out the CCEE Stampers blog (goes live 12 AM EST) to see the rest of the creations the CCEE Stampers created this week. You can also see more details of their creations on their individual blogs:
Anne Harmon
Liz Williams
Lois Bak
Lynn McAuley
Maryann Einam
Kelly McKown-Santi
Supplies:
For your shopping convenience, all products are linked below. Compensated affiliate links are used where possible with no extra cost to you. This helps me to continue to share all the projects I include on my blog. For the benefit of my Australia readers, I have started to include some links to Australian stores when available. Please note I only use and share products I love.

Pretty pretty! So colorful and festive - I'm going all over this card trying to see all the details! Perfect.

Those slimline cards give you lots of extra room for lots of cute little creatures to come to mushroom land this week!!! Fun challenge this week!

Your Plan B worked just fine. And, of course, the other dies arrived the day of the challenge. Your card is adorable!

These delightful critters seem to be enjoying their life among the mushrooms. What a joyful scene, Frances!! Awesome work!

Oh, this is SOO cute! Glad you finally got your order, even if you couldn't use it for this challenge.