This is another of the cards I created back in October at a Shoebox swap I attended with a group of friends. This card was designed by Jane.

This looks so much better in real life then it does here as it was so hard to get a good photo of it being so long.

Last year another friend Trish, received a similar card for Christmas which we all drooled over. Jane had asked if she could borrow it as she wanted to make one for a friend, I was there when she asked to borrow it and I jokingly said … oh yes you can make us one for Christmas.

Well the joke was on me, because the day of the shoebox swap, Jane pulled out her sample which was this! There is so much work in this card and Jane had done most of it all ready for us. Thank you Jane! All we had to do was adhere the bits together and assemble it. 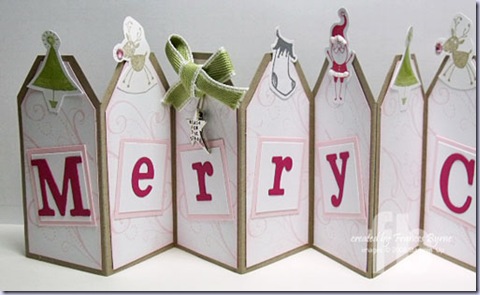 Here is a closer look at the first part of the accordion card.

And finally the second part of the card.

Email ThisBlogThis!Share to TwitterShare to FacebookShare to Pinterest
Labels: Christmas

Fantastic! I love how this looks - creative and fun!

so gorgeous & what a fabulous decor item too!-love it!!

this is so pretty...Great idea!

This is so cool!!