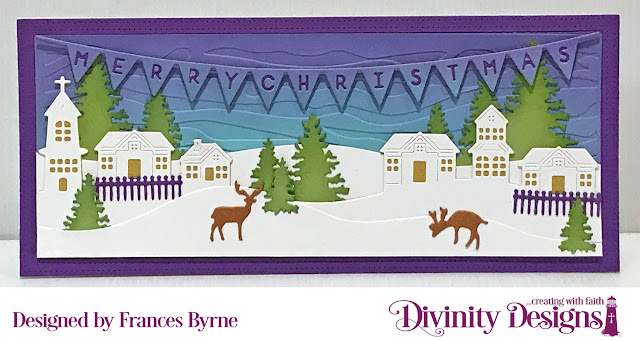 I have a Christmas themed Slimline card on my blog today using dies and an embossing folder from Divinity Designs November/December release.

I used the white inner panel from the Slimline Thin Pierced Frame die as the base for my winter scene. Using Divinity Designs blending brushes, I blended on Salvaged Patina and Villainous Potion Distress Oxide inks to add the color to the background. I then used the Wood Grain Embossing Folder to add texture to the panel.

I used the dies from the Slimline Tree & Hill Silhouettes die sets to die cut the trees border from green and the other two borders from white cardstock. One of the white borders is the same as the edge of the tree border, so I adhered the white over the green to add the snow to the bottom of the trees. I adhered this tree border to my card.

I then used the Slimline House and Layer Silhouettes die set to die cut the house border from white and the layer from gold cardstock and layered the two together. I adhered this panel to the card a little lower from the trees.

I adhered the remaining snow border along the bottom of my card.

I die cut the fence included in the Slimline House & Layer Silhouettes die set from purple cardstock and added those to the scene. 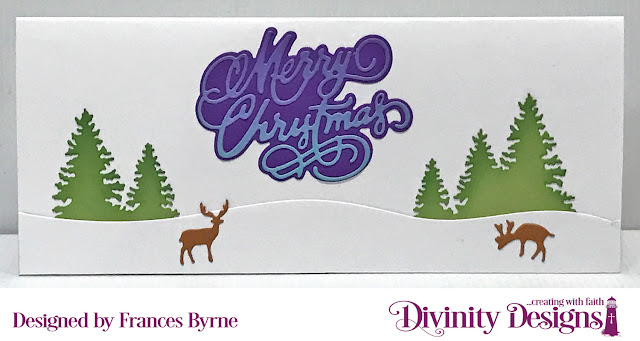 I added the "Merry Christmas" sentiment using the Merry Christmas & Layer 2 die set. The top layer was also blended using the same Distress Oxide inks I used for the front.

Love how you created the sky on this one