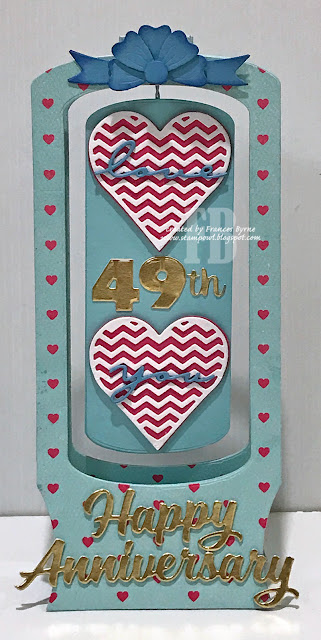 Hi Crafty Friends,
Earlier this month, my husband & I celebrated our 49th anniversary, of course I had to make him a special card.
I have been having fun playing with Scappy Tails Craft Slimline Snow Globe die set, so I decided to pull it out to create my card for our anniversary.
I die cut the main frame die from the set four times from blue cardstock and two times from heart patterned paper. I layered two cardstock frames and one patterned paper frame together to create two decorated frames. One for the back and one for the front. I used the other dies included in the die set to assemble the snow globe as directed.
I used the smaller of the oval panels included in the die set to create the centre spinner panel. To decorate the panel I added two hearts. I then added the "love" and "you" from Karen Burniston's Pop 'n Swap die set which I placed on each of the hearts.
In between each of the hearts I added "49th" using the dies from Karen Burniston's Numbers die set. These were die cut from gold foil cardstock.

I placed my "Happy Anniversary" sentiment to the base of the snow globe, using Karen Burniston's Word Set 12 - Anniversary die set.
To decorate the very top of the snow globe I added a bow using Spellbinders Christmas - Shopping Cart Holiday And Presents die set. 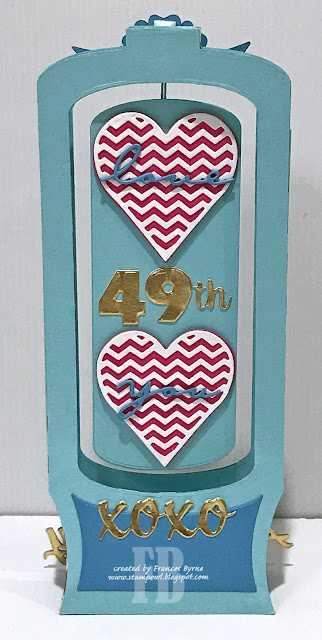 I created two centre panels exactly the same, sandwiching the twine that makes it spin between the panels.
I kept the back fairly simple, added just the "XOXO" above the label, which gave me a place to write my personal greeting.