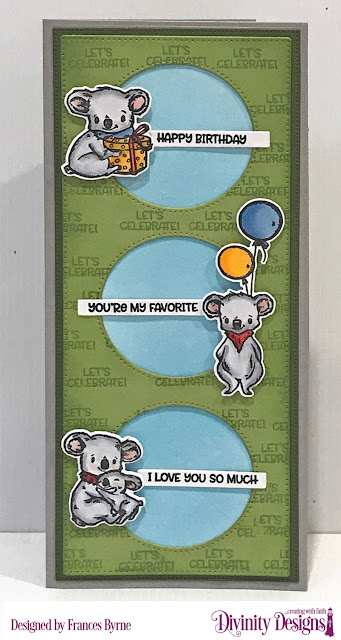 Hi Crafty Friends,
Today I am sharing a Slimline card I created using stamps and dies from Divinity Designs May Release.
My original Design Team parcel for May went missing, so it had to be sent again and it finally arrived with my June release parcel last week ... yay! I had been looking forward to the cute stamp sets and Slimline dies that were included in that release.
For my card today I pulled out the Slimline Circle Windows die which I die cut from green cardstock. I then used one of the sentiments included in the Koala Bear stamp set which I stamped repeatedly over the panel using green ink.
I adhered a panel of white cardstock that I blended blue ink over underneath the slimline rectangle panel.
The koalas and sentiments are all from the Koala Bear stamp set. I used the Sentiment Strip with Layers die set to die cut all of the sentiments.
The Slimline Circle Windows panel was then layered onto a rectangle panel using the largest of the dies from the Slimline Pierced Rectangles die set and then adhered to a Slimline Card using the Slimline Card Base die set. 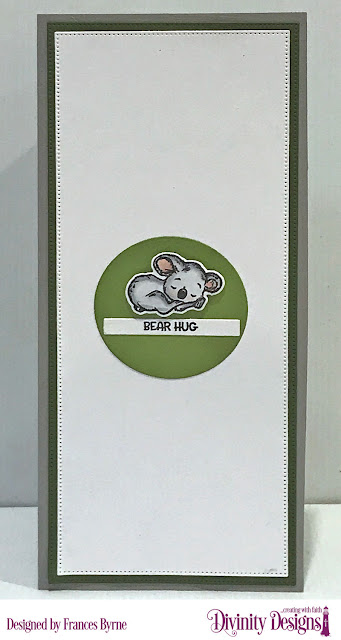 For the inside of the card I added a green circle which was left over from die cutting the Slimline Circle Window panel for the front of the card.
I added another of the sentiments and the last of the koalas that were included in the Koala Bear stamp set.