Not A Creature Was Stirring

Hi Crafty Friends,
Yes I know Christmas is over, but I had a few Christmas themed stamp sets that I wanted to use before the end of the year, so I could put all the Christmas things away until next year. So rather than not share them until 10 or so months later, I figured I will share them now.
Today I have Christmas themed Lift the Flap Slimline card to share.

To create my card I used Lawn Fawn's Small Slimline with Lift the Flaps die set. This die cuts a panel with 3 flaps that open to reveal whatever you desire in the windows under the flaps.
I die cut mine from red cardstock and layered it to a top folding Slimline card that measures 3 1/2inches x 8 1/2 inches. I used papers from Lawn Fawn's Let it Shine Paper Pad for the background of my card.
I used the inner tree from the Stitched Christmas Tree Frames die set, which I added to each of the flaps and then added the letters "J O Y" to each of the trees. The letters were die cut using white glitter cardstock. 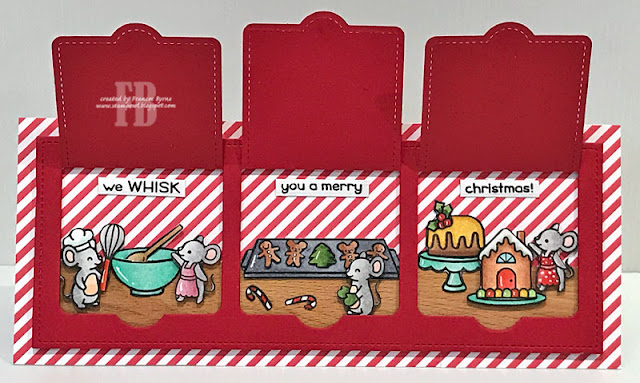 For the inside of my card I created a cute kitchen scene using the Not A Creature Was Stirring stamp set.
I added some woodgrain paper at the bottom for the bench and then added the same diagonal striped paper for the walls.
I added at least one mouse to each of the windows and filled in the rest of the area using the kitchen images included in the stamp set.

For the inside of the card, I added the woodgrain paper again along the bottom of the card. I added a few of the images that I used on the front.
I added three sentiments to the upper portion of the card,  two are from the stamp set and the "Merry Christmas" was from the Car Critters Christmas Add-on set.

Such a cute card