Welcome to our December Karen Burniston Designer Challenge.
Check out Karen Burniston's blog on Wednesday (US Time) when you will be able to see what all the designers created for the challenge this month, plus Karen will have an amazing video tutorial to share with us all.
Our challenge theme this month is ...  "MINI POPS" - use the Mini Pops die set in a card of any theme. 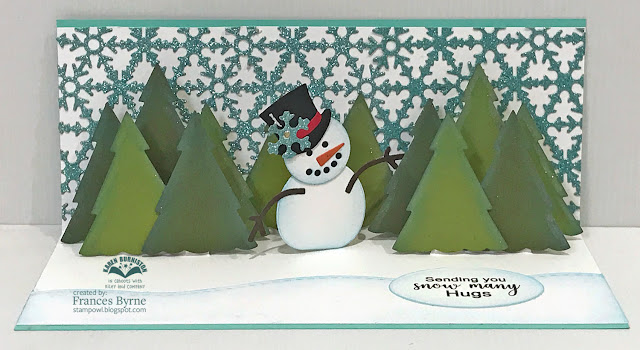 As the Mini Pops Pop-up die set was designed to fit inside of Slimline Card, I decided to create a Slimline card for today's challenge. Not that I need an excuse to make a Slimline card, and of course this die set will work equally when in any sized card you want to create.
Being that it is now December, I am thinking more about Christmas cards right now. I didn't end up putting any Christmas sentiments on my card, so it can be used for any occasion but the option is there.
I used the larger pop-up die included in the Mini Pops die set to die cut a pop up into both ends of the Slimline white card panel. I then used the Pattern Plate - Snowflakes which I die cut twice from aqua glitter cardstock and adhered this to the back panel of my card. I had to trim around the pop-up and position the second snowflakes pattern plate so it looked continuous, but that was easy enough to do. 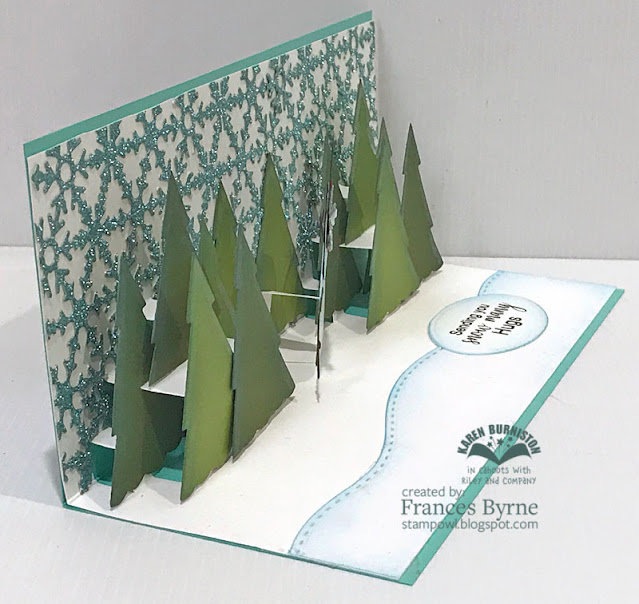 Next I used the tree from the Christmas Trees Pop Stand die set ... it is actually the piece that comes out of one of the trees when you die cut. I die cut the tree 12 times from two different colors of green cardstock. I then added Rustic Wilderness Distress Oxide ink around the edges and also Shimmer pen. I adhered the trees to the pop up panels. I did cut slits into the trees that are on the two smaller pop up panels on each side, to allow the trees to surround the pop up a little better. I also cut a little of the trees on the upper most pop up, so that the trees fitted into the width of the card.
I used the larger of the individual pop ups included in the Mini Pops die set to add to the centre of the card. To this I added the Snowman which is die cut using the Snowman die set.
I used the border included in the Long Nature Edges die set, to die cut a white panel which I attached to the front edge of the card, to make it look like snow.
I computer generated a snowman themed sentiment which I die cut using one of the ovals from the Crosshatch Ovals die set.

As the focus of this card is the inside, I kept the front of the card fairly simple, repeating the snowman theme of the card.
I used the Long Rectangles - Crosshatch die set to die cut my white and teal rectangles. I assembled another snowman's head which I adhered to the centre of the rectangle.
I used the Alphabet die set to die cut the letters "S N W Y" which I die cut from aqua and black cardstock, offsetting the aqua slightly over the black to create a shadow.
To create the word "wishes" I combined the word "wish" from the Word Set 2 - Birthday die set and the "es" from the word "blessings" from the Word Set 7 - Autumn die set.

Great card for the challenge!

Love all the trees on this festive creation - such a lovely layout and wonderful created piece of art! TFS

This is a great card. I love how they are set to create a forest. Great Christmas card.

This card is so cute and made me want the mini pop-up set even more!