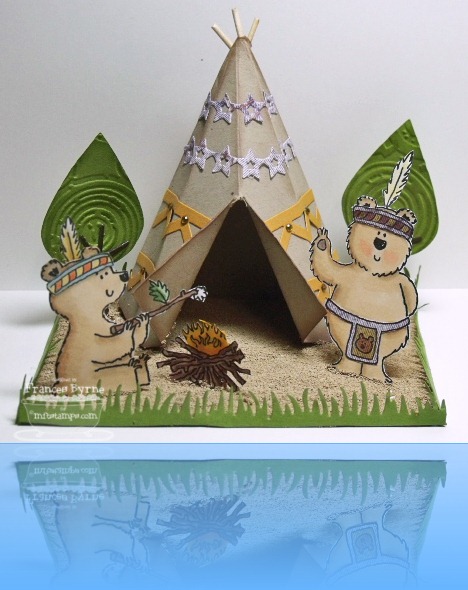 It’s that time again when the MFT Stamps designs team begins showing our MFTeasers in preparation of the new stamps which will be released by MFT Stamps after the release party this coming Tuesday 3rd May.

Today the Design Team are featuring three of the new stamps to be released. These are “ Fred Bear Plays Indian”; “Flapper Doodles – SS Flapper” and “Well Worn Greetings”. 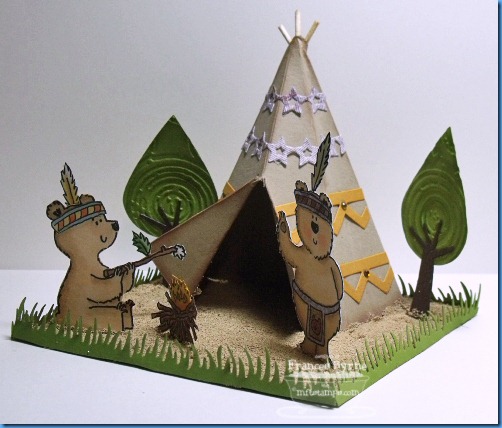 For my project today I decided to create a 3 D scene. I thought Indian Fred Bear needed a playmate so I also used Fred Bear goes Camping, I stamped the headpiece again on white card and added that to my other bear so they both looked like Indians.

I used a number of MFT Die-namics on this scene, these include: 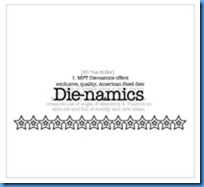 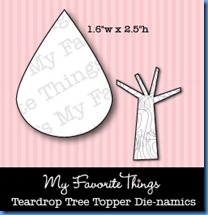 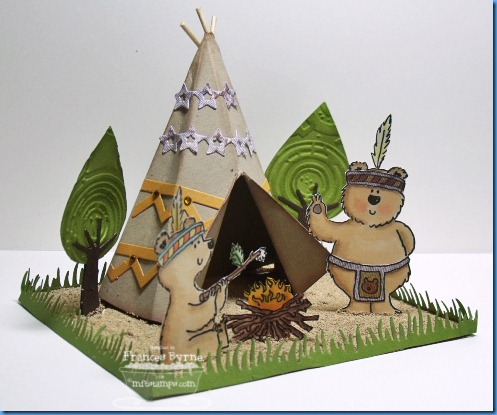 It’s also time for another MFT Guest Designer Contest. This month Jody Morrow and I are hosting the challenge. Would you like to win over $125 in prizes and be the guest designer for the MFT June release. You will find the details over on the MFT Forum.

This isn’t what I had originally planned for my sample for the challenge, but due to Easter & Anzac Day holidays down here the stamps I was going to use were delayed. So I had to make the theme which is Blue Jeans & Bling …. fit with this project. I had some blue jeans designer paper so I used that to die cut the MFT Die-namics star border on the tepee. And also the clothe & head piece Indian Fred is wearing. For the bling I used rhinestones on the MFT Die-namics Open Zigzag border on the tepee. 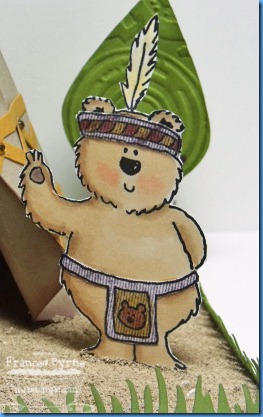 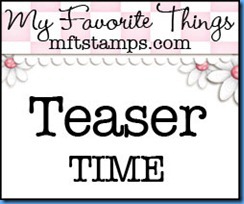 Here are the details about the upcoming release on May 3rd at 10 PM EST:

Oh my word, Frances. That is AMAZING! HOW COOL! What a cute little scene you built. LOVE it.

Frances, I am so beyond blown away with your project!!! Holly molly, what a FUN scene you created, just AMAZING!!

Shut the front door Frances! Your Fred Bear scene is so stinkin cute! You always come up with the most creative projects! Where were you when I needed to help my kids with what I called "their parent" projects" in school? LMBO

this is AMAZING Frances! just drop-dead-cool!

Wow! That is so cool! I just love your 3-D scene. Fred Bear is just the cutest!

SHUT UP!!!! This is the most creative and ADORABLE creation, Frances!!! Awesome work!!

OMG Frances this is GORGEOUS!!~

I love it! Love making scenes and this is the cutest! perfect for a little cowboy!

WOW!! I am so impressed with all
of the intricate work you have put
into this darling fred bear scene!
It is unique!!

THis is so stinkin' adorable!

This is fantastic! It must have been so much fun to see it work out so beautifully. I can just see this scene on top of a boy's birthday cake, or in a shadow box! You have wonderful creative talent!

I am blown away by this fun and creative project. You have some mad paper skills!

Oh my goodness! Get out, Frances! This is AMAZING! LOVE your 3D project! So fun!!!

WOW! This is incredibly adorable and so detailed! Fabulous job!!!

Wow Frances this is awesome! I love every little detail!

OMG, I love this! I need this new Fred Bear for sure. Your scene and the TeePee are so cute. Fabulous.

just amazing Frances! what an awesome 3D scene- so super cute & fun- love that tepee & both Fred bears are adorable!

Such a fun and fabulous scene Frances!!

sooooo CUTE! and wonderfully creative. you are amazing!

Wow Frances!! This is so fabulous and amazingly creative!! Awesome job!

Oh my GOSH Frances! What a spectacular little scene you have created here - I am so impressed with every little detail from the grass to the top of the tee pee. Thank you for going through such efforts showcasing MFT products for our viewing pleasure, we are truly touched by your talent.

That zig-zag die works perfectly on a tee-pee. How do you ever come up these wonderful ideas?

This is SO adorable Frances! Love all that detail!

Over the top creative, Frances!! I LOVE your little scene!!!

I am so inspired each release by you all What a awesome project love it... This was created with hours of love and much detail and totally from the heart.

I just love all the fun details to this
I don't even want to see the rest of the release last month was one of the best ever this one is looking to be the same!

OM Frances, you are sooo talented! What a fabby project!!!!

Awesome, awesome! Love this scene and that teepee!

OMG! What a fabulous idea! Love it!

How adorable! Thanks for sharing it during the hop. :D

What an adorable scene! I love the way you incorporated Aztec Day with these new stamps!

Ohh. My. Goodness. Your scene is fantastic - really looking forward to this release!!

Frances! holy Smokes... this is so adorable. How long exactly did it take you to make this???
Well it rocks that's for sure.

WOW Frances! You rocked this one girl! This is amazing!

Well, like everyone else, my mouth is agape as this INCREDIBLY cute and detailed 3-D project you created, my friend! OMG! It's over-the-top CUTE!

Wow, what a fun 3-D project! Love it! So creative, love the way you used the dies. Super work! :)

FRANCES!!!! This is AMAZING! What an incredible piece of art you have created!!!!!