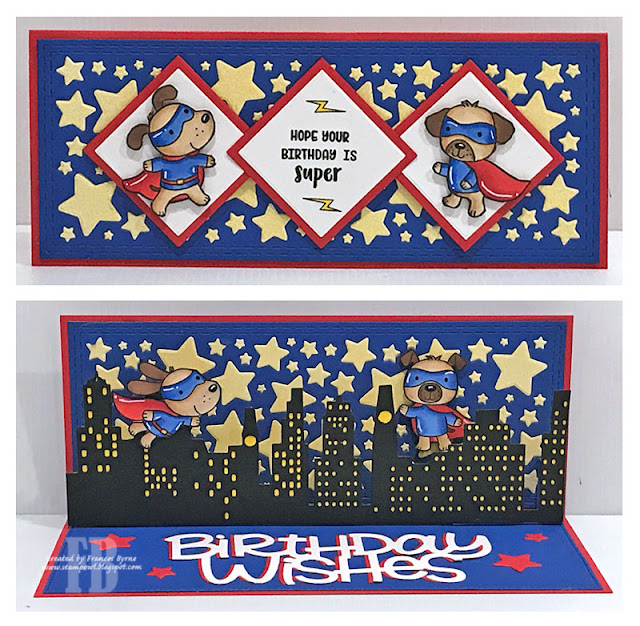 Hi Crafty Friends,
It’s challenge time with the “Crazies” over on the Crazy 4 Challenges blog. As challenge hostess for the month I continue to issue the challenges.
Being the third Saturday of the month, it's time for a sketch challenge. This time around I created a Slimline sketch.

For my card today I decided to go with a super heroes theme, so I chose the colors red, blue and yellow.
I used Whimsy Stamps Slimline Stars Background die for the background of my card and yellowed glittered stars. The stars are the wide strip that is shown in the sketch, I didn't have yellow glitter cardstock, so I used white cardstock and then blended on yellow inks over the glitter cardstock.
I used Hero Arts Infinity Nesting Squares to create each of the three diamonds. The super hero dogs are from MFT Stamps Super Dogs stamp set.
The sentiment in the middle diamond is from a Sunny Studio Stamps Super Hero stamp set. 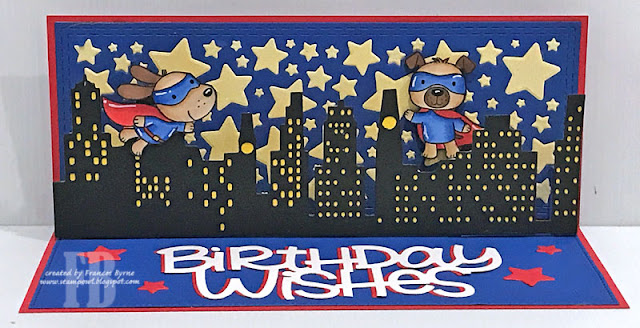 For the inside of the card, I created a pop-up card. I created another star background using the Whimsy Stamps Background die I used on the front of the card.
I created the cityscape pop up using Kat Scrappiness' Slimline Layered Cityscape die set, which I popped up using a simple box pop-up in several places along the fold of the card. This allowed for the different heights of the cityscape die cut.
I then added two more Super dogs to my background scene.
The blue panel on the base of the card was die cut using Picket Fence Studios Slimline Nested Rectangles die set.
I added the "Birthday Wishes" which is from Mama Elephant's Big Birthday Wishes die set, I then added a few red stars around the sentiment.
Don't forget to check out the rest of the “Crazies” cards over on the Crazy 4 Challenges blog and also their individual blogs for more details.
Amy Ottmers
Karen Ostergard
Maryann Einam
Rebecca Ednie
Nicky Foden
Lois Bak