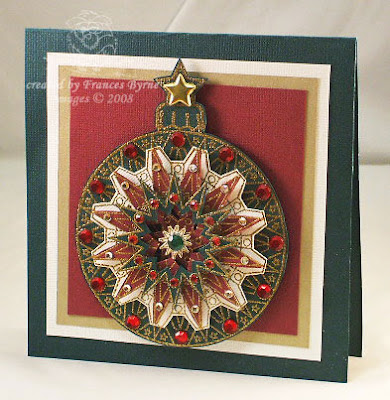 On Thursday I attended a stamp club which I go to each month. This month the project we all got to do was to create these two ornament cards using Outlines Rubber Stamps.

Each kit contained enough materials to create both cards as long as we used our craft knives to cut out all the pieces rather than scissors. We received 4 images of the ornament ..... 1 in white; 1 in burgundy and 2 in green, it was then a matter of cutting out the various pieces as per the instructions also supplied to create the cards .... lots of cutting but the results are well worth it.

Once the cutting was all done it was time to assemble our pieces on our card using foam squares to 3 D it. We also attached red, green & clear gems in various sizes to our ornament. 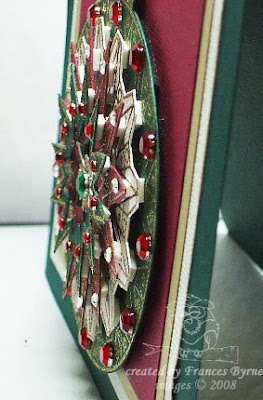 Here is a close up photo of the card to show better how this card is 3 D ... it is hard to show when you take a front on shot. Both cards use this technique but I only took the one pic of the first card rather than both. 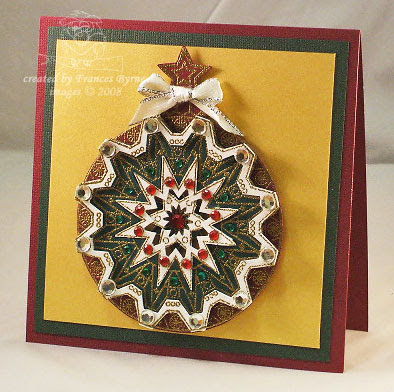 This card here was made using all our leftovers from card #1 ... great to get 2 cards for the price of 1 ;) . The original sample we were shown didn't include the middle star (the one with the circle of red gems on it) but one of the women in our group had the bright idea of including this piece and as it was leftover anyway and I liked the look I decided to also add it to mine. I also ended up putting the additional red gems to mine too once I got home and found them.
Posted by StampOwl at 6:00 AM

Gorgeous! Was it a stamp to create the layers? Anyway, they are quite, quite lovely!

These cards are just sooooooooo beautiful - far too beautiful to even contemplate ever giving them away to anyone! lol

These ornaments are so beautiful. I can tell you have put a lot of work into them, but after seeing the end results, it was worth the hard labor, I am sure.

WOW! These are fabulous! They look well worth the time and efforts! Love them!

These are beautiful, way too beautiful to stay on a card. If the bottom layer was not foam attached to the base card, you would be able to lean the ornament against greenery on a mantel or windowsill, or hang from a decoration. Just beautiful work!!
Gail

Omigosh this is gorgeous!

Wow, these are gorgeous!!