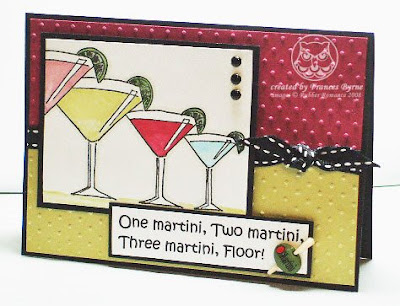 One martini, two martini, three martini, floor! I am soooooo very excited today as one of my very good friends is this week's featured stamper, Kim Muhl aka nutsymuhl on SCS. Congratulations Kim you so deserve this!!!!!

I decided to CASE two of her cards today and both cards were chosen because I had seen them recently and had admired them and also because I owned the stamps/supplies used to create the particular cards.

Basically this week I did a straight out CASE of Kim's cards but of course I did stick to the rules and made at least 2 changes to each card. 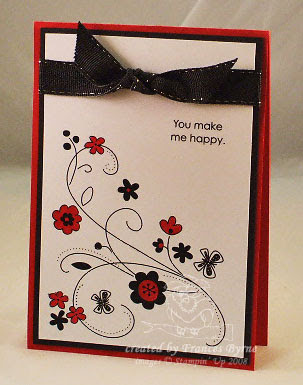 The second card I CASEd of Kim's I chose because it used the rub ons that were available for this years SAB .... Kim had created a one layer card which you can see here.

Here are my changes:
Wow .... no stamping, brads or paper piercing were needed to create this card! 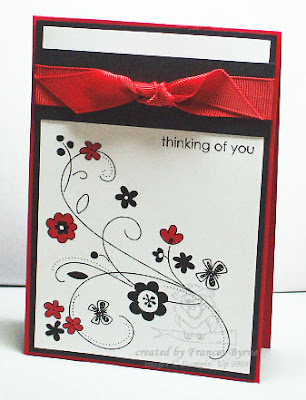 Here is another version of the rub on card above ..... this was the original one I started but I was playing around with ribbon and what I had added to it I didn't like so while trying to remove the ribbon I also tore some of the white card a little ... so I put it aside and started again. I decided to see if I could fix it rather than waste those rub ons ... so I attached a piece of black card across the top which hides the torn area and then added the red ribbon. I also changed the sentiment on this one.

Your cards worked out great despite your problems, Frances! I love 'em!

I love 'em all! Thanks for playing along!